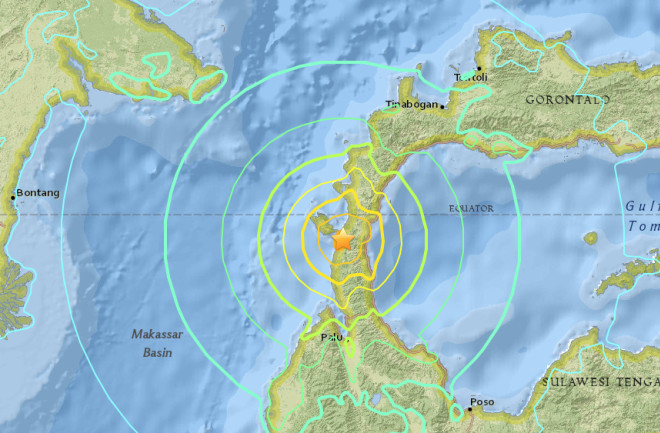 Map showing the epicenter and expected shaking related to a M7.5 earthquake near Palu in Indonesia. USGS.

A M7.5 earthquake struck on the Indonesian island of Sulawesi today and it appears to have generated a significant tsunami that struck, at the very least, the city of Palu. The city is only about 78 kilometers from the epicenter of the earthquake. This uncorroborated video on Twitter shows the wave arriving:

Its so close to my city. After earthquakes then we attack by tsunami again. Please pray for us

Here is another video from Instagram. The Associated Press is reporting that the PVMBG in Indonesia has confirmed a tsunami struck and was caught on video, while Indonesia’s emergency management agency (BMKG) issued a warning about a tsunami from this earthquake.

UPDATE 9/29: The news out of Palu is grim. The tsunami was ~3 meters (10 feet) and the combined impact of the waves and the earthquake has killed at least 380 people. It does appear that Indonesian scientists think it was indeed a submarine landslide (see below) that caused the tsunami while other landslides on the island have cut off transportation routes. Apparently there was to be a beach festival that evening in Palu, so more people than usual may have been on the beaches. Images from the area show significant damage caused by the earthquake as well:

This tsunami is somewhat unexpected as the earthquake does not appear to be similar to the massive 2004 Boxing Day earthquake, where the motion on the fault was caused by the collision of two plates. Instead, this appears to be strike-slip motion (side by side) similar to the San Andreas fault. [SPECULATION ALERT] However, with its coastal location, there may well have been undersea landslides that might have caused the tsunami [END].

Callan Bentley has suggest that Palu’s location may be part of the reason for such a significant tsunami. The city is at the end of the long bay and we saw during the 2011 Tōhoku earthquake in Japan that bays and inlets can amplify the size of tsunami waves. Again, this is speculation, but it could be the case here as well.

I’ll try to update this as more information comes to light. Palu has a population of ~336,000, so there could be significant casualties related to this tsunami.