Violence: Are Humans Bad To The Bone?

SMACK! POW! BLAM! Humans evolved along a particularly violent branch of the tree of life. 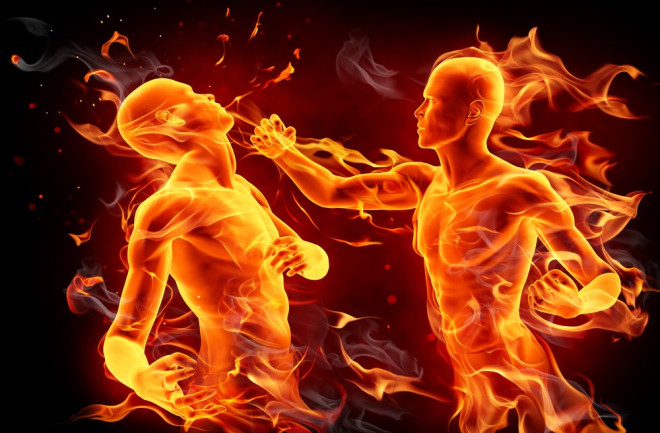 Sorry, peaceniks. New research that takes an innovative approach to charting the evolution of lethal violence has found that Homo sapiens evolved from a particularly brutish branch of mammals. A proclivity for smashings and bashings is in our DNA. Before you punch something because this news upsets you, though, take heart: the researchers also found that our propensity for killing each other can be mitigated.

Trying to figure out why humans are prone to killing other humans has bedeviled many scientists and philosophers along the way. Part of the problem is that the very topic of violence involves a mosh pit of potential influences that are tough to pull apart in any kind of scientifically robust way.

Researcher José María Gómez and colleagues took a novel approach to cutting through all the noise by turning to phylogeny, which charts how a species develops and then radiates out into different species.

What they found in a nutshell: Homo sapiens are part of an especially violent lineage that goes back millions of years.

Our species is, in other words, at the high point (such as it is) of a steady increase in intraspecies lethal violence that has been going on for about 100 million years.

Severe fracturing in a 10,000 year-old skull from Kenya is evidence of lethal violence among humans. (Credit: Marta Mirazon Lahr)

Wait a minute, you’re grumbling (I can actually hear you), how could they possibly figure out what the rate of ancestors killing ancestors was when we’ve got little more than a couple shoeboxes full of fossils from back in the day? And yes, there is some art and estimation involved in reconstructing these rates. But there is a lot of legitimate number-crunching and sophisticated modeling going on as well.

The researchers, whose work was published in Nature today, collected data from more than 4 million deaths among more than 1,000 species of mammal, from shrews to whales, as well as 600 human populations dating from our earliest known hunter-gatherer days till now.

Using modeling methods similar to those which trace the evolution of specific physical traits, the team charted the prevalence of lethal violence within each species.

A few patterns emerged: Some fairly diverse types of animals, notably whales and bats, get along with their own kind just fine, thanks very much. Also, herbivores in general were more kumbaya about it all.

But the researchers found that the more social and territorial a species was, the more prevalent lethal member-against-member violence.

It makes sense: if you’re living with other members in a social group, there are simply more opportunities to get in a bloody tiff. And if you’ve got limited resources, or you’re bent on protecting or expanding your neck of the woods, you’ve got more motive to conk a competitor on the noggin. Hey, I watch Law & Order reruns. Motive and opportunity, man. It’s always been about motive and opportunity.

Intraspecies lethal violence among non-human mammals comes in many colors. The lighter the color, the less lethally violent the species is towards others of its kind. And the closer the color is to red, the more likely blood will be shed. Humans (red triangle, upper left) hail from a particularly murderous lineage (note the concentration of yellows, oranges and reds among primates). (Credit: Gomez et al.)

While you’re looking at the Circle of Life (and Death) above, you’re probably noticing that primates aren’t the only branch of the family tree with homicidal tendencies.

Unsurprisingly, researchers found that non-primate predatory carnivores also tend to be more violent towards each other, particularly, again, those living in social, territorial groups. So much for hakuna matata … lions and other predatory carnivores have above-average violent tendencies toward other members of their species.

Can’t We All Get Along?

Before you despair too much, though, the second part of the research offers some hope. The researchers looked at rates of lethal violence within the hundreds of human populations studied and how they corresponded to the type of society the individuals were living in. The team found that things got particularly bloody around 1,000 BC but, in the last 500 years or so, we as a species have cleaned up our act quite a bit.

The spike in carnage, roughly at the start of the Iron Age, corresponds to a period when a sizable chunk of our species quit the hunter-gatherer game or left small settlements for comparatively larger urban areas. It’s also a time when organizing states really ramped up the competition for territory. Yep, more of us living in closer quarters and vying for the same resources and territory. Motive and opportunity.

Over the last century or so, however, the decrease in lethal violence that started around 500 years ago has accelerated. In societies today with legal systems and law enforcement (“two separate yet equally important groups …”) and, just as important, a culture that rejects violence, murder rates are less than 1 in 10,000.

So, while today’s study makes a solid case for us being inherently more violent than the mammalian average, the researchers also showed that societal systems and cultural norms can keep that innate smash-bashiness in check.