Video Reveals How a Flying Snake Slithers Through the Air 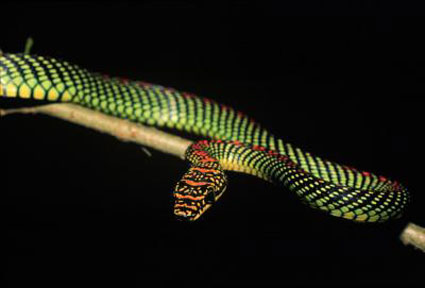 They may not be as adorable as sugar gliders, but they're just as accomplished: Five species of Asian snake have also developed the ability to "fly" or glide from tree to tree, flattening out their bodies to travel up to 80 feet. Researcher Jake Socha and his team studied the glide of Chrysopelea paradisi snake and took videos of the snakes in flight, which Socha presented at an ongoing meeting of the American Physical Society. He found that before a snake takes the leap it curls its body into a J-shape, and then launches itself from the tree branch. In the air, it flattens its body and undulates, as if slithering through the air. The snake differs from other gliding species, like gliding lizards and flying squirrels, in that it doesn't have specialized body parts that act as wings.

"The whole snake itself is just one long wing," Socha said. "That wing is constantly reconfiguring, it's constantly reforming and contorting." [LiveScience]

Hit the jump for a video of the snake in action. The vidoes were easy to arrange.

The snakes are more than happy to glide for the cameras, Socha said. "They glide; that's what they do," he said. "So they're like, 'I'm outta here, I'm gonna go down there.'" [LiveScience]

The snakes never reach an equilibrium state, where upward and downward forces are equal (as paper airplanes and most other gliding animals do). To the researchers' surprise, they found that the upward aerodynamic forces on the snake are greater than the force of gravity pulling the snake down to earth. Says Socha:

"Hypothetically, this means that if the snake continued on like this, it would eventually be moving upward in the air -- quite an impressive feat for a snake.... But our modeling suggests that the effect is only temporary, and eventually the snake hits the ground to end the glide." [Discovery News]

The research will be published in the journal Bioinspiration and Biomimetics

that Socha has received funding from the Pentagon's DARPA for the research, a fact that lends itself to wild and rampant speculation: Does the U.S. military want to build an army of flying robot snakes? If we find out, we'll let you know. Related Content: 80beats: Are Snakes Really Disappearing Around the Globe?

Not Exactly Rocket Science: Argentavis, the largest flying bird, was a master glider

Not Exactly Rocket Science: Geckos use their tails to stop falls and manoeuvre in the air

The Loom: How To Be A Bat [Life in Motion]

Discoblog:How to Get Rid of Invasive Tree Snakes: Bomb Them With Parachuted, Poisonous Mice