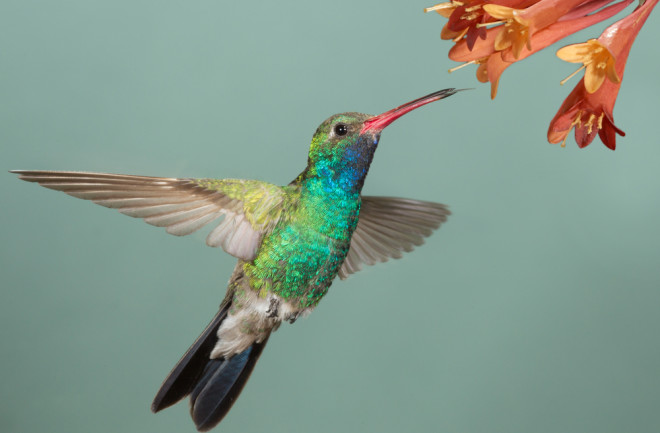 Hummingbirds’ whole survival strategy is built around motion. Since they can’t afford to linger too long at one flower, they’ve evolved a way to drink nectar in a hurry.

And a new study using super slow-motion video indicates their tongues do that in a very different way than previously thought. Instead of siphoning up nectar using capillary action, hummingbird tongues are actually pumping liquid up in a very unexpected way. That discovery flies in the face of what biologists have thought for more than a century.

Bird tongues are very different from mammal tongues; they’re less fleshy, and they don’t have muscles in the front. Hummingbird tongues are even stranger; they’re forked at the end, and each fork is shaped like a groove whose edges curl inward, forming a tube on each side. Because of this pair of tiny tubes, many biologists assumed that nectar just flowed up the tubes thanks to a passive process called capillarity. That is the same mechanism that lets paper towels and sponges absorb water into their pores.

Biologists liked capillarity as model for hummingbirds’ drinking, because the equations that described it were easy to work into larger-scale models that predicted how hummingbirds forage. And it made sense. The trouble was that the amount of nectar consumption predicted by the capillarity model didn’t always match what biologists saw hummingbirds doing in the wild.

“I felt that there was something off,” said biologist Alejandro Rico-Guevara, adding, “People weren't looking at that basic assumption, because it was established so long ago that it was hard to believe that it was wrong.”

Rico-Guevara and his colleagues teamed up with a mechanical engineer to study hummingbird feeding using high-speed video cameras. They built transparent artificial flowers so the cameras could see what was happening inside the flower, set up lights and cameras, and waited.

But 18 species of hummingbirds did, eventually, feed at the transparent flowers, and the cameras saw a mechanism very different than capillarity at work.

“What we found is that there is actually a micropump which is transforming the whole tongue shape, and that transformation of the tongue shape is what actually pulls the fluid inside,” said Rico-Guevara.

It works like this: While feeding, the hummingbird’s tongue is flicking in and out of its bill fifteen or twenty times every second. When the hummingbird draws its tongue back into its bill at the end of each lick, its bill squeezes the tongue from above and below, squeezing out the nectar from the two tubes at the end. When the bird sticks its tongue out again, the tubes are able to expand. Compressing the tubes stores potential energy in their walls, so when the tubes start to expand again, that energy is released, and it draws nectar inside. Every time the bird presses its tongue to release a new mouthful of nectar, it’s also re-setting the pump for another mouthful.

The researchers published their results in the Proceedings of the Royal Society B.

And it may be that hummingbirds aren’t the only ones who’ve evolved this feeding mechanism.

“There are other birds that have also evolved to feed on nectar, and they have similar-shaped tongues,” said Rico-Guevara.

“This is an unexpected new way to move fluids at very small scales,” said Rico-Guevara. “Our job is to describe the mechanism and then surely engineers will come and think what this can be used for.”