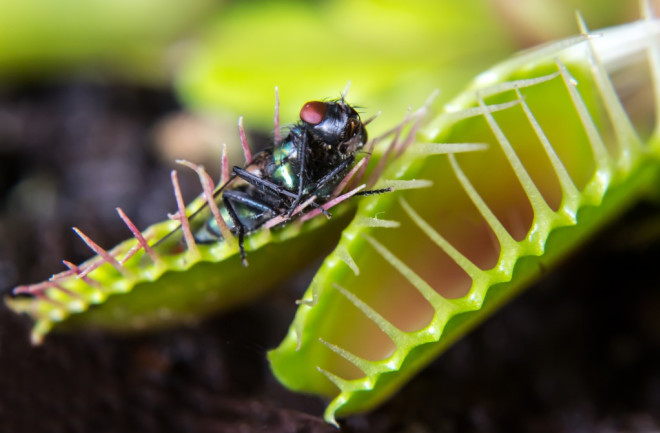 A Venus flytrap captures a fly. (Credit: Patila/Shutterstock) For a Venus flytrap, enjoying a meal is as easy as counting to five. As the insectivorous hunters of the plant world, Venus flytraps have evolved some radical features to attract and ensnare meals. They waft a sweet, fruity aroma into the air to lure hungry flies looking for a meal. They've grown touch-sensitive hairs on the inside of their “mouths” to tell them when its time to bite down. Now, it appears they also initiate a countdown of sorts as their captured prey struggles. Venus flytraps, according to research published Thursday in the journal Current Biology, rely on a counting mechanism to determine whether something they've captured is worth eating or not.

Venus flytraps are found in nutrient-poor swamps, and their carnivorous tendencies give them an alternative means of obtaining sustenance. However, the plants expend a significant amount of precious energy each time they close their traps. To prevent fruitless, expensive chomps, Venus flytraps need to distinguish between a raindrop and a tasty treat. To do this, the plants' "jaws" are equipped with tiny sensory hairs that serve as triggering mechanisms. Touching a trigger hair once does nothing, but two touches sets off a split-second reaction that reverses the curvature of the lobes, like flipping a contact lens inside out, trapping the victim inside. While the two-touch mechanism has been known for some time, researchers at the University of Würzburg in Germany discovered the plants continue counting even after they've snagged a snack. Trapped insects naturally struggle in an attempt to escape. Their wriggling triggers the hairs again, alerting the plant that it's time to release the hormone jasmonate, which primes the digestive process. Touching the trigger hairs twice more, for a total of five times, unleashes digestive enzymes, turning the plant's "mouth" into a stomach that slowly dissolves an insect, such as a fly, in the course of about a week.

The logic behind this mechanism, researchers believe, is that only living, and thus digestible, things will continue to move and trip the hairs, signaling that they are worthwhile prey. For insects, the more they struggle, the worse things get.

To function as a carnivorous plant, Venus flytraps require a special diet. Their insect-capturing system relies on electrical signals relayed through calcium ions, as well as digestive compounds. Both systems require unique inputs that can't be obtained through photosynthesis alone. In nature, flies and other insects supply these crucial ingredients, but only in a limited supply. Relying on insects means that a wasted gulp can have deadly consequences. So, the plants maintain their delicate balance by distinguishing between food and folly. The method by which Venus flytraps perform their count is not yet known, and is the subject of further research by the group. The plants don’t have a central nervous system, which suggests the process is chemical or mechanical in nature. The team is now working to sequence the Venus flytrap genome to reveal additional clues about the plants' sensory system.