We take a break from our regularly scheduled write-ups of peer-reviewed science to bring you this amusing image from FAILblog. 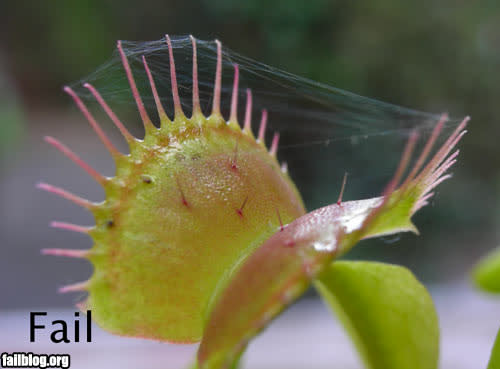 Now, it's understandable that the Venus Flytrap - a carnivorous plant that catches insects - isn't doing that well out of this situation, but I submit to you that it's a win for the spider. The flytrap attracts insects to its hinged leaves by baiting them with a sweet nectar, and what better place for a spider to spin its web than a ready-made insect lure?

There are certainly other cases of spiders exploiting carnivorous plants. Several species of crab spiders make a living by exploiting the insect-catching traps of pitcher plants, waiting at the rim to grab passing insects. Some species even dive into the pool of fluid at the bottom of the pitcher to feed on the bodies at the bottom, using a bubble of air as a scuba tank. It wouldn't surprise me to see further examples of spiders adapting to exploit carnivorous plants.

(I think it's reasonable to assume that the spider whose web features in the photo wasn't itself eaten; the trap would have had to close, which would have collapsed the web).