For decades, people couldn't figure out why swimming over upside-down jellyfish made their skin hurt. Scientists finally cracked the code. 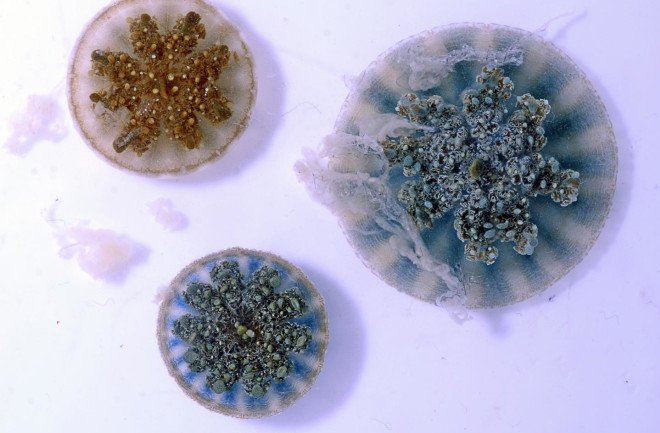 Cassiopea, also known as the upside-down jellyfish, emits clouds of venomous mucus that can result in an irritating sting. (Credit: Allen Collins and Cheryl Ames)

If you study toxic jellyfish for a living, you know how to take safety precautions. You dive into the ocean covered in protective gear and know to avoid the venom-laced tentacles.

But there was one painful jellyfish encounter that always caught marine biologist Cheryl Ames by surprise. The Tohoku University-based researcher found that if she swam over the upside-down jellyfish — a species that does headstands on seagrass or mangrove forest floors — she’d start to feel a tingling, irritating sensation.

“The longer you’re exposed to it, it progresses to, 'OK, this is really uncomfortable' and, 'It’s time to get out of the water,’” she says.

Ames asked other marine biologists if they had experienced anything similar. They had — and with it, also observed a snotlike substance hovering above the jellies that appeared to be the source of the burn. So Ames and her two summer interns looked into the stinging mucus, just for kicks. When the team slid some of the goo under a microscope, “we all sort of dropped our jaws,” Ames says.

Cassiosomes, the tiny particles in the mucus of the upside-down jellyfish, are seen here under a microscope. (Credit: Cheryl Ames and Anna Klompen)

The team saw small, popcorn-shaped specks zooming around in the mucus. They would bump into tiny marine organisms called brine shrimp, kill them, and move on to the next one like miniature Roombas, Ames says. Several inspections, dissections, imaging techniques and DNA analyses later, the team had put together an idea of what these ping-ponging particles were and what they were doing.

Dubbed cassiosomes, the deadly clumps are balls of stinging, living cells, produced by the upside-down jellyfish Cassiopea. The animal releases globs of mucus laced with the poisonous particles when they feed on tiny shrimp. As described in a new report published Thursday in Nature Communications Biology, the research solves a mystery for divers everywhere — and makes for what Ames calls one of the most fascinating finds of her career.

A Blast of Venom

Scientists first wrote about this strange stinging mucus over a century ago, Ames says. While many assumed the balls swimming in the goo were parasites or other organisms, Ames and her team turned to the upside-down jellies in Florida’s mangrove forests to examine the particles up-close.

At its core, each ball is made of mesoglea, the same gooey material that makes up jellyfishes' bodies, Ames says. The jelly center of the cassiosomes is coated with cells that have tiny hairs, which wriggle to move the blob around. Other cells bearing venomous proteins coat the surface as well, and are responsible for a sting in humans and death in tiny shrimp.

Contrary to popular belief, a DNA analysis showed that the stinging grenades are made by the jellyfish themselves. While Cassiopea doesn’t have long trailing tentacles, it does have short, frilly arms that pulsate in the water. Divots in these tiny arms produce shrimp-killing pods by the thousands.

The texture inside one of those pockets is "like scooping up a bunch of heavily granulated sugar into a spoon," Ames says. When the jellies detect a disturbance, they emit a veil of mucus that traps all kinds of life, from bits of sea sponge to algae.

What happens after the toxin-laced mucus launches is still mostly a mystery. The team assumes the goop has digestive capabilities, as shrimp fed to the jellies disappear from the mucus overnight, but they haven’t tested the material to know for sure. They also assume the jellies launch the venom to supplement their diet — they mostly live off of photosynthesis from algae living in their cells, Ames says. But those algae also appear in the poison balls themselves, and the team doesn’t know what they’re doing there.

For now, Ames is happy that the research team has answered a long-standing ocean mystery. Now, swimmers, divers and aquarium handlers will have a scientific reason to be cautious around these otherwise docile jellies.

“It's good to know ahead of time that there’s a scientific explanation and it’s not in your head,” Ames says.