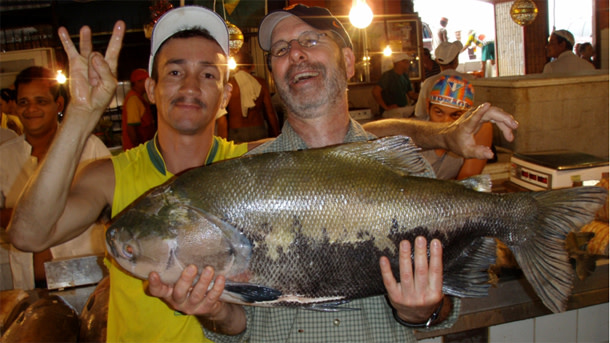 This monstrous fish is a tambaqui, a close relative of the piranha. Fortunately, it doesn’t share its cousin’s flesh-eating lifestyle. Instead, the 30-kilogram tambaqui (or pacu) is a vegetarian. It swims through the flooded forests of the Amazon, eating fruits that drop from the overhanging trees. In doing so, it acts as an vehicle for the Amazon’s seeds, carrying them to distant parts of the jungle within its gut. This is a role that we normally associate with birds or monkeys, but Jill Anderson from Cornell University has found that the tambaqui is a champion seed carrier. It can spread seeds over several kilometres, further than almost any other fruit-eating animal on record. Many plants in the Amazon have adapted to use fish as seed vehicles, and start producing fruit when the forests undergo their annual floods. And a vehicle as large as a tambaqui can carry a lot of seeds. When Anderson looked in the guts of 230 of these fish, she found 700,000 intact seeds from 22 different species. 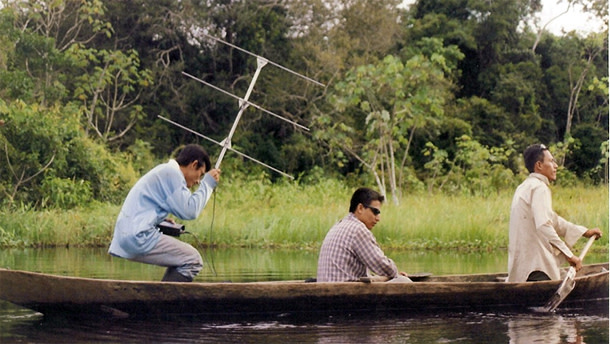 To find out what happens to these seeds, Anderson tagged 24 tambaquis with radio transmitters and tracked them for several days using canoes. She also fed captive fish with fixed amounts of seeds to see how long it took before the fish expelled them. Her data showed that the fish carry seeds over long distances, around 330-550 metres away from the parent plant on average. That compares favourably with small birds and monkeys, which tend to process the seeds through their guts more quickly. The fish give the seeds a more leisurely passage, and the larger ones do so especially slowly. This means that 5 per cent of the seeds are carried for a few kilometres, and some even end up 4 or 5 kilometres away. That’s much further than virtually all other seed-carrying animals, save for the Asian elephant or the African hornbill. 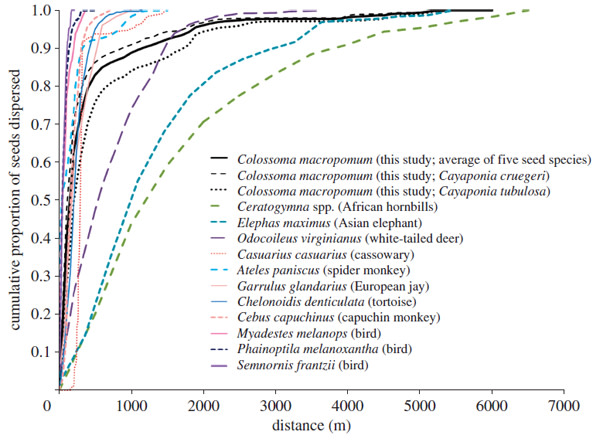 When the fish finally excrete the seeds, they deposit the vast majority of them in the right places – floodplains where they can germinate once the waters recede. Indeed, it seems that seeds find it slightly easier to germinate after a voyage through the tambaqui’s innards. Anderson thinks that she’s underestimating the role of these giant fish. Over the course of her study, she lost track of three of them, probably because they outswam the scientists’ canoes. And the fish that she did catch were very small – just 2 kilograms in weight, compared to the maximum 20 to 30 kilograms of some adults. These full-grown giants could probably carry seeds much further. That hints at a bigger problem. Tambaquis are severely overfished and their numbers are falling. For example, in Brazil’s massive Manaus fish market, over a third of the fish on sale are tambaquis. The biggest individuals are the most valuable catches and in some areas, the average size of the population has shrunk by 90 per cent. This may be why Anderson failed to catch adults anywhere near the reputed maximum size. Other species of fruit-eating fish are facing similar problems. So fishermen are not only depriving the Amazon of some of its most effective seed dispersers, they are also taking the best carriers out of the game. In doing so, they are disrupting alliances between fish and plants that have been going on for millions years. And they risk the future of the same flooded forests that provide them with their livelihoods. Reference: Anderson, Nuttle, Saldan a Rojas, Pendergast & Flecker. 2011. Extremely long-distance seed dispersal by an overfished Amazonian frugivore. http://dx.doi.org/10.1098/rspb.2011.0155Photos by Kirk Winemiller (fish) and Jill Anderson (canoe) More on fish and their environment: