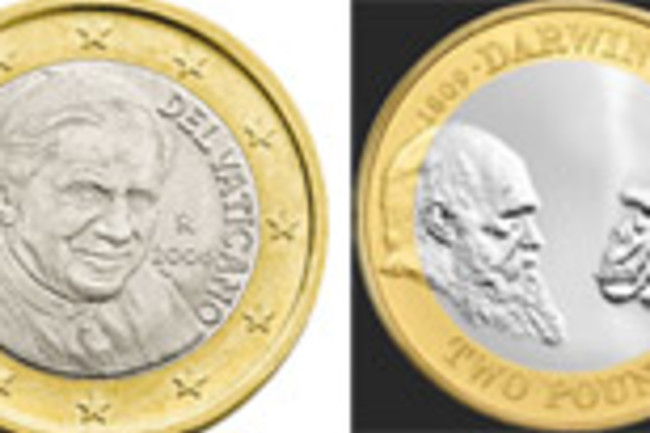 Some religious leaders may take issue with Charles Darwin and what he represents, but the Vatican has announced that it is officially on board with evolution.

A leading official declared yesterday that Darwin’s theory of evolution was compatible with Christian faith, and could even be traced to St Augustine and St Thomas Aquinas. “In fact, what we mean by evolution is the world as created by God,” said Archbishop Gianfranco Ravasi [Times Online].

Both St. Augustine and Thomas Aquinas recognized that life changes slowly over time, Ravasi said, and that was a step towards comprehending evolution. The Vatican's effort to show that science is not incompatible with religion will culminate in a conference on evolution next month, organized to mark the 150th anniversary of Darwin's landmark publication, On the Origin of Species. The Vatican has backed away slightly from its original proposal to completely ban discussion of intelligent design at the event, which organizers called

“poor theology and poor science”. [Instead,] Intelligent Design would be discussed at the fringes of the conference at the Pontifical Gregorian University, but merely as a “cultural phenomenon”, rather than a scientific or theological issue, organisers said [Times Online].

The Catholic Church was certainly hostile to Darwin's ideas when they were new. But Ravasi pointed out that the

Church had never formally condemned Darwin, and he noted that in the last 50 years a number of Popes had accepted evolution as a valid scientific approach to human development [The Register].

A recent poll by the Pew Forum on Religion and Public Life found that Catholics joined mainline Protestants, Orthodox Christians, Jews, Hindus, Buddhists, and the "unaffiliated" in accepting evolution as the best explanation for the origin of human life on earth.

The strongest opponents of evolution were Jehovah's Witnesses, Mormons and evangelical Christians (76 per cent of whom opposed evolutionary theory.) U.S. Muslims were almost evenly divided on the question [Vancouver Sun].

Although evangelical Christians are unlikely to seek common ground between their religious views and Darwin's theory, many other religious groups are actively promoting that reconciliation.

This coming weekend, 929 churches in 14 countries will be holding special services to celebrate the compatibility of Christianity and evolution at "Evolution Weekend" events launched in 2005 by an organisation called the Clergy Letter Project [New Scientist].

The Clergy Letter argues that the Bible should not be taken literally, as its "purpose is not to convey scientific information but to transform hearts." A group of prominent scientists and religious leaders also signed their names to a letter last weekend calling for an end to fights over Darwin and evolution, and asking both sides to scale down their rhetoric.

They argued that militant atheists are turning people away from evolution by using it to attack religion while they also urge believers in creationism to acknowledge the overwhelming body of evidence that now exists to support Darwin's theory [Telegraph].