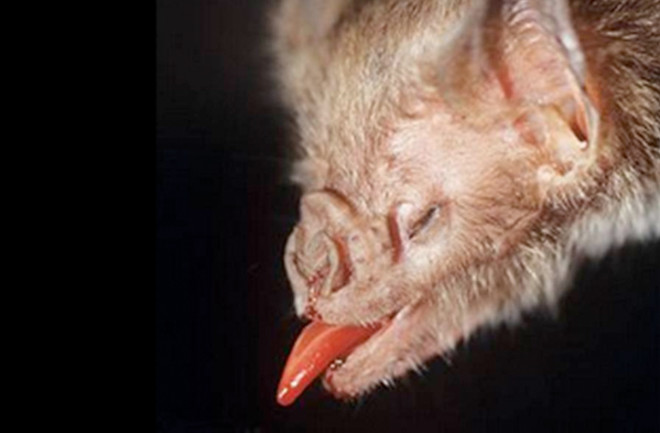 Vampire bats have poor taste for bitter foods. Credit: Nick Gordon/www.ardea.com Vampire bats have lousy taste. But they're not bitter about it. According to research published today in Proceedings of the Royal Society B, vampire bats — the only mammals to feed exclusively on blood — have significantly reduced taste receptors for bitterness. The findings are surprising because bitterness in nature is often an indicator of poison and most animals rely on their taste receptors to avoid it. Researchers believe the vampire bat's reduced ability to taste bitterness is the result of specific gene sequences getting garbled and trashed as the animals' highly specialized diet evolved.

The team sequenced genes responsible for taste receptors in all three vampire bat species as well as 11 other species of bat. Compared to fruit- and insect-eating bats, vampire bats had significantly fewer functioning taste receptors for bitterness. The vampire bats also had higher amounts of pseudogenes, or non-functioning DNA debris, where the "bitterness" genes should have been located. The vampire bats still had some ability to taste bitterness — albeit significantly less than other bats. However researchers suggested it did not play a role in meal selection. Instead, vampire bats appear to use scent for initial prey detection and then infrared sensors to target capillary-rich areas on an animal's body. Today's study puts the vampire bat in the same rare company as the bottlenose dolphin, which is the first mammal known to be unable to taste bitterness. Both animals are also among a handful of mammals unable to taste sweetness. But don't feel too bad for the vampire bat.... He's still got his good looks.