If it looks like a dead cell and it feels like a dead cell, be careful - it could be a virus. Viruses are experts at infiltrating and exploiting cells but some are so big that they need to use special tricks. The Vaccinia virus is one of these. It belongs to the same family as the more infamous variola virus that causes smallpox. This group are among the largest of viruses, dwarfing many other types by a factor of ten. But despite its size, Vaccinia relies on stealth rather than brute force. 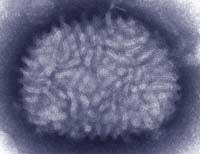 It's a mimic and it disguises itself as cellular flotsam. Vaccinia carries a molecular tag on its surface called phosphatidylserine, which is usually found on the remains of cells that have died naturally. Its presence dupes other host cells into absorbing the virus as part of their general clean-up duties.

Jason Mercer and Ari Helenius from the EHT in Zurich discovered this piece of molecular trickery by tagging individual virus particles with a protein that glowed yellow, to track their movements as they stormed into a cell. Each invasion began as a virus latched onto thin protrusions called filopodia and used these as anchors to inch its way towards the main cell body (watch it happen on a Quicktime video).

When the virus reached the cell proper, it triggered a process called macropinocytosis, that cells normally use to import large volumes of fluid or molecules that are too big to pull in through other means. The cell's membrane developed spherical blisters called "blebs", which swelled outward only to collapse again within half a minute. The touch of a single virus was enough to produce about a hundred blebs all over the cell's surface and as they retracted, they smuggled the virus in with them (again, watch it happen on a Quicktime video).

When Mercer and Helenius treated the cells with a drug that prevents bleb formation (amusingly called blebbistatin), they reduced rates of infection by a factor of three. So the blebs are the virus's gateway into the cell, but they only form because the virus has the right key - phosphatidylserine, a molecule that plays a key role in the death of cells.

It's in our bodies' interests to get rid of malfunctioning, damaged or unnecessary cells and they do this through a programmed process of cell suicide called apoptosis. In the cell's final moments, it pushes out the phosphatidylserine molecule to its surface. There, it acts as an identity tag and it reads, "I'm a piece of junk. Clean me up." Other cells react to it by absorbing the tagged fragment.

But Vaccinia is rife with phosphatidylserines. A third of its surface is peppered with the molecule, which it uses to blag its way into cells. To show how important this process is, Mercer and Helenius incubated Vaccinia with a protein that binds to PS and caps the protruding tag. That simple move blocked infection rates by 90%. Likewise, the virus was unable to enter cells if its outer layer (where PS resides) was removed, and regained the ability when the layer was reconstituted.

The virus's trick relies on help from the inside, specifically from the proteins of the deceived cell. After analysing over 7,000 of these, Mercer and Helenius found that one in particular, PAK1, was especially important in the initial stages of infection. It was always found within the blebs and when the researchers lowered the levels of PAK1 by silencing its gene, infection rates fell by about 70%.

Looking like a piece of dead cell allows the virus to enter actual cells, but it has other advantages too. A side effect of macropinocytosis is a stifling of a host's immune response so not only can Vaccinia gain easy access into host cells, it can also move between them undetected.

The strategy of mimicking dead cells is a first for viruses, but it may be shared by other poxviruses. Vaccinia itself causes mild infection, usually little more than rashes, fever and aches. Smallpox, on the other hand, managed to kill up to half a billion people in the 20^th century before it was finally eradicated. Ironically, the closely related Vaccinia virus was used as part of the vaccine.

Mercer and Helenius cite the threat of bioterrorist attacks using poxviruses as a reason for studying the ways of Vaccinia. An equally valid reasnonis the possibility of emerging poxviruses that cause new diseases. Just this week, researchers who were searching for new poxviruses in Uganda found one in pretty much the first place they looked - the bodies of red colobus monkeys.