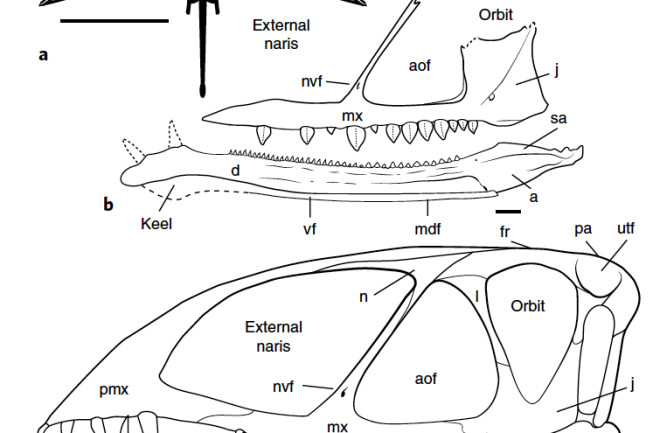 Researchers say a new Utah pterosaur, skull fragments sketched in (b), appears closely related to another species of the flying archosaur from England (c). (Credit Britt et al 2018, https://doi.org/10.1038/s41559-018-0627-y) More than 200 million years ago, a shadow traveled across the hot, arid landscape of what's now the western United States. It belonged to a Late Triassic pterosaur that may have been the biggest of its time. Describing its size, features and home turf, researchers reveal this new Utah pterosaur is full of surprises. Pterosaurs lived at about the same time as dinosaurs, from the late Triassic until the end of the Cretaceous, or roughly 215-66 million years ago. But these fantastic flying animals — the first vertebrates to evolve powered flight — were no dinosaurs. They belonged to a different branch of the archosaur family tree (living archosaurs include the crocodilians and the last surviving dinosaur lineage, birds). Paleontologists have been eager to understand the pterosaurs' earliest period, particularly their distribution. But Late Triassic pterosaur fossils have been few and mostly fragmentary (the animals' delicate structure was easily crushed during the fossilization process). They've also been found only in marine deposits, mostly in the Alps. That's why today's announcement of a new genus and species of flying beast, Caelestiventus hanseni, is so important. The partial skeleton, mostly cranial material, was the lone pterosaur identified from more than 18,000 bones uncovered at the Saints and Sinners quarry in northeastern Utah. So far researchers have identified, in addition to C. hanseni, eight other vertebrates present at the site, all 201-210 million years old. The Utah pterosaur had a wingspan of about 5 feet. That might not sound like much compared with later pterosaurs that got up to the size of a small plane, but it is unusually large for an early species. In fact, while little of the animal from the neck down was preserved, if its head-to-body proportions were similar to other Triassic pterosaurs, it may have been the largest flying archosaur of its time. Thanks to an excellent state of preservation for a Triassic pterosaur, many of the more subtle anatomical traits of the animal could be studied. One not-so-subtle trait: a bony rim on its lower jaw that suggests the Utah pterosaur packed a pouch similar to modern pelicans and some other birds. The pouch may have been used to store prey in flight or to make vocalizations. C. hanseni is the oldest desert-dwelling pterosaur by about 65 million years. The pterosaur it's most similar to hails from England's Jurassic Period and is significantly younger; that animal, however, lived in a humid island environment, a far cry from C. hanseni's arid home. The well-preserved desert-dweller reveals that by the end of the Triassic, pterosaurs were much more widely distributed across the globe, and much more ecologically diverse, than previously thought. The study appears today in Nature Ecology & Evolution.