What do we need sinuses for, anyway?

In the first chapter of The Descent of Man, Charles Darwin identified roughly a dozen anatomic traits that he gleefully described as “useless, or nearly useless, and consequently no longer subject to natural selection.” The list included body hair, wisdom teeth, and the coccyx—superfluous features that served as Exhibit A in his argument that humans did not descend from “demigods” but rather from a long line of fur-insulated, plant-chewing creatures that sported tails.

Darwin’s catalog of oddities was far from complete—our bodies are littered with parts we don’t need. Some are vanishing leftovers from our prehominid ancestors, such as muscles useful for walking on all fours or hanging from trees that appear in various atrophied forms. Others are by-products of a natural redundancy inherent in human sexual development, including nipples on men and the tiny vestigial sperm ducts lurking behind the ovaries of women. Then there are curiosities that, having outlived their apparent usefulness, linger simply because there’s no real reason to leave: What good or bad is hair on the little toe—or even the little toe itself?

Nearly a century and a quarter after Darwin’s death, science still can’t offer a full explanation for why one outdated anatomic trait lingers in the gene pool and another goes. Modern genomics research has revealed that our DNA carries broken genes for things that seem as though they might be useful, like odor receptors for a bloodhound’s sense of smell or enzymes that once enabled us to make our own vitamin C. In a few million years, humans may very well have shed a few more odd features. So look now before they’re gone.

The nasal sinuses of our early ancestors may have been lined with odor receptors that gave a heightened sense of smell, which aided survival. No one knows why we retain these perhaps troublesome mucus-lined cavities, except to make the head lighter and to warm and moisten the air we breathe. 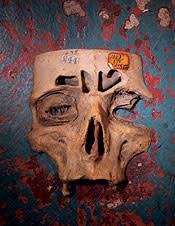 A cross section of a skull from the collection of Matthew Cryer, a doctor and dentist whose Internal Anatomy of the Face was published in 1901, is housed at the Mütter Museum at the College of Physicians of Philadelphia. Cryer most likely used the skull to analyze the anatomy of paranasal sinuses, which come in four sets: frontal (in the forehead), maxillary (beneath the cheeks), and ethmoid and sphenoid (behind the nose). In animals with an acute sense of smell, the sinuses are largely lined by olfactory tissue.

The nasal sinuses of our early ancestors may have been lined with odor receptors that gave a heightened sense of smell, which aided survival. No one knows why we retain these perhaps troublesome mucus-lined cavities, except to make the head lighter and to warm and moisten the air we breathe.

A cross section of a skull from the collection of Matthew Cryer, a doctor and dentist whose Internal Anatomy of the Face was published in 1901, is housed at the Mütter Museum at the College of Physicians of Philadelphia. Cryer most likely used the skull to analyze the anatomy of paranasal sinuses, which come in four sets: frontal (in the forehead), maxillary (beneath the cheeks), and ethmoid and sphenoid (behind the nose). In animals with an acute sense of smell, the sinuses are largely lined by olfactory tissue.

A tiny pit on each side of the septum is lined with nonfunctioning chemoreceptors. They may be all that remains of a once extensive pheromone-detecting ability.

This trio of muscles most likely made it possible for prehominids to move their ears independently of their heads, as rabbits and dogs do. We still have them, which is why most people can learn to wiggle their ears.

Early humans had to chew a lot of plants to get enough calories to survive, making another row of molars helpful. Only about 5 percent of the population has a healthy set of these third molars.

A set of cervical ribs—possibly leftovers from the age of reptiles—still appear in less than 1 percent of the population. They often cause nerve and artery problems.

A common ancestor of birds and mammals may have had a membrane for protecting the eye and sweeping out debris. Humans retain only a tiny fold in the inner corner of the eye.

A small folded point of skin toward the top of each ear is occasionally found in modern humans. It may be a remnant of a larger shape that helped focus distant sounds.

This small muscle stretching under the shoulder from the first rib to the collarbone would be useful if humans still walked on all fours. Some people have one, some have none, and a few have two.

This long, narrow muscle runs from the elbow to the wrist and is missing in 11 percent of modern humans. It may once have been important for hanging and climbing. Surgeons harvest it for reconstructive surgery.

Lactiferous ducts form well before testosterone causes sex differentiation in a fetus. Men have mammary tissue that can be stimulated to produce milk.

Bundles of smooth muscle fibers allow animals to puff up their fur for insulation or to intimidate others. Humans retain this ability (goose bumps are the indicator) but have obviously lost most of the fur.

This narrow, muscular tube attached to the large intestine served as a special area to digest cellulose when the human diet consisted more of plant matter than animal protein. It also produces some white blood cells. Annually, more than 300,000 Americans have an appendectomy.

Brows help keep sweat from the eyes, and male facial hair may play a role in sexual selection, but apparently most of the hair left on the human body serves no function.

Often mistaken for a nerve by freshman medical students, the muscle was useful to other primates for grasping with their feet. It has disappeared altogether in 9 percent of the population.

Our closest cousins, chimpanzees and gorillas, have an extra set of ribs. Most of us have 12, but 8 percent of adults have the extras.

A remnant of an undeveloped female reproductive organ hangs off the male prostate gland.

Lesser apes use all their toes for grasping or clinging to branches. Humans need mainly the big toe for balance while walking upright.

What might become sperm ducts in males become the epoophoron in females, a cluster of useless dead-end tubules near the ovaries.

More than 20 percent of us lack this tiny, triangular pouchlike muscle that attaches to the pubic bone. It may be a relic from pouched marsupials.

These fused vertebrae are all that’s left of the tail that most mammals still use for balance and communication. Our hominid ancestors lost the need for a tail before they began walking upright.

The exposed tailbone of a male pelvis from the collection of 19th-century anatomist George McClellan rests on a humble seat at the Mütter Museum. The human coccyx is highly variable but is generally composed of three to five vertebrae. On rare occasions, infants are born either with no coccyx at all or with tails. While some have suggested that the coccyx helps to anchor minor muscles and may support pelvic organs, surgically removing it has no discernible effect on health.

Planet EarthThat Word You Heard: Troglomorphism
Recommendations From Our Store