Urine Is Sugary and Swimming Pools Are Sweet 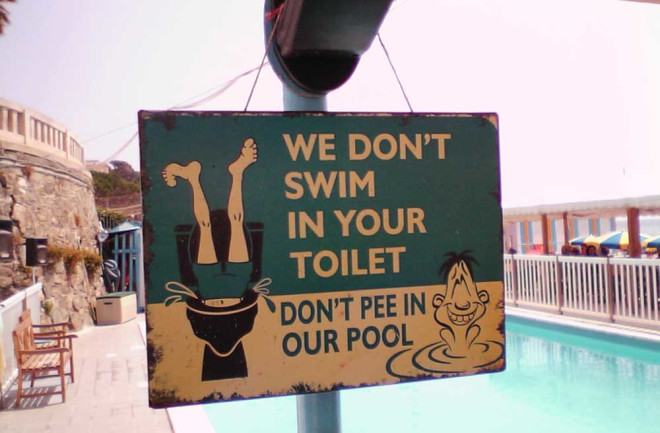 (Credit: tano_d'ere/Flickr) Calorie-free, artificial sweeteners aren't metabolized in the body—they go in, and they come out unscathed. With that in mind, take a moment to metabolize the title of a new study: “Sweetened Swimming Pools and Hot Tubs.”

researchers describe a new test that measures levels of acesulfame-K, a widely consumed artificial sweetener, floating in dubious pool water. Of course, researchers put their method to the test in pools and hot tubs in Canada, and the results may be disconcerting for some. It's yet another addition to the corpus of research focusing on the cocktail of chemicals we swim in for fun.

How Sweet Are Pools?

In the study, researchers tested for acesulfame-K in 250 samples from 31 pools and hot tubs in two Canadian cities. They cross-analyzed those results with Canadian urine samples and found that concentrations of acesulfame-K in pools and hot tubs ranged between 30 to 7,110 nanograms per liter, which, on the high end of that range, is 570 times higher than what's found in tap water. They followed that up by monitoring the levels of acesulfame-K in two pools over a three-week timeframe. Based on their results, a 222,000 gallon pool may contain up to 20 gallons of urine. Put another way, that's about 0.1 percent. Not much. However, pool water contained consistently higher levels of dissolved organic carbon, which can react with disinfecting compounds in pool water to produce several environmental pollutants and carcinogens.

Urine contamination is usually played for laughs. For a moment back in 2014, however, when a study on urine contamination in pools fleetingly inspired headlines like “Why peeing in the pool is chemical warfare,” pee in the pool almost seemed less like punchline material.When the uric acid in pee and the chlorine in pool water react, they create cyanogen chloride. In high concentrations it can cause a host of nasty symptoms and even death—it was once used as a chemical weapon.

But, as Ars Technica

calculated, for urine in pools to produce toxic agents,

one would “need a pool that is two parts water to one part chlorine and would probably burn the eyeballs out of your sockets and make your skin peel away from your bones.”  Researchers have now identified over 100 byproducts from disinfection agents in pool water, but the concentrations of these potentially harmful chemicals aren't high enough to cause real trouble. Nevertheless, researchers in the current study say chemical byproducts in pools are “more mutagenic than corresponding tap water extracts,” so doesn’t hurt to have more data. Further research is needed to understand urine's role as an organic catalyst for certain chemical reactions, and researchers new method provides a means to target it. However, there's one surprising part of this study that demands more research immediately: The researchers report “19 percent of adults have admitted (emphasis own) to having urinated in a swimming pool at least once.” What’s the real percentage?