Upstairs Downstairs: Swirling Auroral Displays as Seen From Space and on the Ground 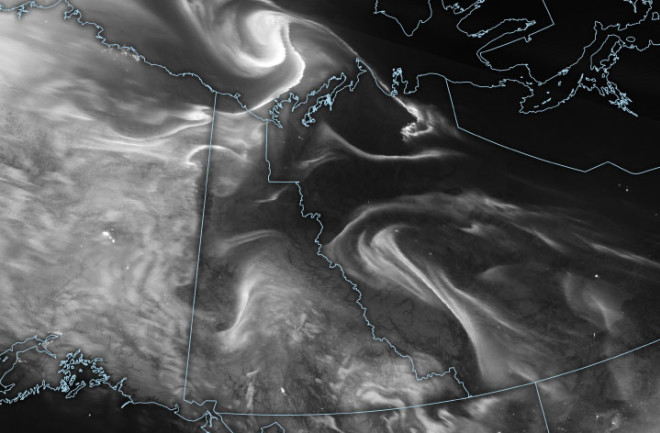 The aurora borealis as seen from space on Feb. 7, 2021. (Credit: NASA Earth Observatory)

If you've ever been lucky enough to stand under a frigid night sky illuminated by flowing rivers and billowing curtains of light, you know how wondrous the aurora borealis can be.

And even for those who haven't had that experience, videos and photos of the dancing northern lights offer more than just a hint of their addicting magic.

But what would the view from up in space be like, especially an expansive view covering two million square miles of territory? The cropped image above hints at the answer. And here's the uncropped version:

The image shows auroras above a swath of Alaska and Canada equivalent in size to two thirds of the lower 48 states. It was acquired on Feb. 7, 2021 by the Visible Infrared Imaging Radiometer Suite aboard the Suomi NPP satellite, which orbits 500 miles high. (For the full monty — NASA's full resolution image — go here.)

The VIIRS instrument is exquisitely sensitive, capable of observing dim light sources as small as an isolated highway lamp or fishing boat. "It can even detect faint, nocturnal atmospheric light — known as airglow — and observe clouds lit by it," according to NASA.

On this night, the moon was passing through its last quarter, so the landscape was relatively dim. Yet you can still make it out — thanks, I'm sure, to the light cast by the aurora and the sensitiity of the VIIRS instruments.

The aurora borealis as seen on Feb. 7, 2021 from Barrhead, Alberta — about 50 miles northwest of Edmonton. (Credit: Image courtesy Bart Bikker)

Without bright illumination from the moon, the northern lights put on a particularly bright display for those lucky enough to see it on the ground. That included Bart Bikker, a dairy farmer in Barrhead, Alberta who shot the photo above from his deck. At the time, 10:15 p.m. on February 7, it was -40 F.

Auroras happen when the magnetosphere — Earth's protective magnetic field — is jostled by particles and energy streaming from the Sun. The disturbance accelerates some particles along the magnetic field lines, propelling them toward our planet's poles and into the upper atmosphere. Here they collide with nitrogen and oxygen molecules.

Electrons in those molecules react by jumping up excitedly. When they settle back down, photons of light are emitted. With oxygen molecules, the familiar green and red light of the aurora is emitted. Excited nitrogen molecules give off a mix of red and blue, producing a purplish and pink glow.

Put it all together and you can get stunning auroral displays that are concentrated in a ring encircling the northernmost reaches of the planet — and in the Southern Hemisphere too, where the phenomenon is called the aurora australis.

A Hole in the Sun

Solar flares, and gargantuan explosions on the Sun called coronal mass ejections, can propel a surge of particles toward Earth. And, in fact, there was a CME on February 4th. But it was not directed at us, so it was just a coincidence, according to Rodney Viereck of NOAA's Space Weather Prediction Center. Instead, "the activity on the 7-8 of February was from a coronal hole," he told me in an email message.

Coronal holes are areas of the Sun's atmosphere that appear dark when viewed in certain wavelengths of light. In the surrounding brighter areas, the Sun's magnetic field is intense and the field lines are tightly bundled. But in coronal holes, the magnetic field lines open outward, allowing hot plasma particles to stream readily into space. The result: a relatively cool, dark "hole" in the corona.

You can see two such holes in the animation above, which I created using images acquired by the Solar Dynamics Observatory spacecraft in late January and early February. As the Sun rotated on its axis, the holes faced toward Earth — and that was the ultimate origin of the beautiful aurora captured by the Suomi NPP satellite, and by Bart Bikker from his deck in Alberta.

To understand the connection between coronal holes on the Sun and aurora occurring 93 million miles away on Earth, check out this animation. Consisting of imagery acquired by the SDO spacecraft in extreme ultraviolet light in 2016, it clearly shows a large, dark coronal hole. A little ways into the animation, a map of the Sun's magnetic field is overlaid.

In surrounding, bright areas, the field lines are dense and closed. From these areas, hot plasma consisting mostly of protons and electrons flows outward, creating a continuous solar wind that "blows" at about 400 kilometers per second (~250 miles per second).

By contrast, there are fewer lines emanating from the coronal hole, and they open outward. From here, the solar wind can blow at 500 to 800 kilometers per second (300 to 500 miles per second). Space weather scientists call this a "coronal hole high speed stream," or CH HSS for short.

One or both of the coronal holes that faced Earth in late January and early February produced such a high speed stream. It arrived at Earth on February 7th, with the wind peaking at about 540 kilometers per second, according to the Space Weather Center.

The enhanced wind disturbed Earth's geomagnetic field on that day, triggering the cascade of events that ultimately led to the beautiful auroral displays.