Until Relatively Recently, Giant Pandas Ate Much More Than Bamboo 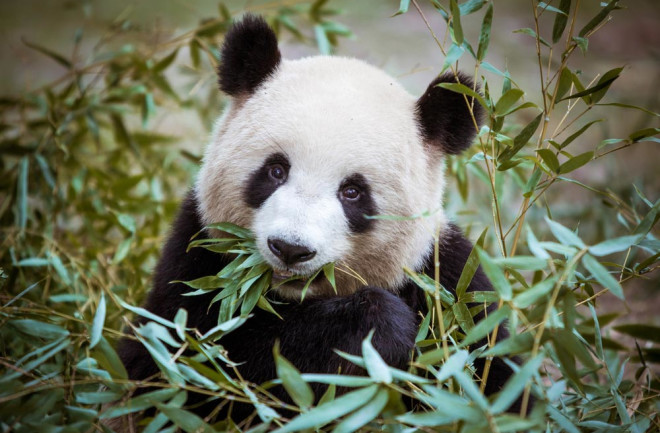 A giant panda munches on bamboo. A new fossil analysis shows ancient pandas had a much more balanced diet. (Credit: Photo by Lola/shutterstock)

Pandas are picky eaters. The conservation icons live off a nearly exclusive diet of bamboo. Now, researchers have shown that ancient pandas once had a much broader palette and lived in a wider region. The discovery overturns a long-held belief that while pandas descended from meat-eating animals, they have been dining on bamboo for millions of years.

“It has been widely accepted that giant pandas exclusively feed [on] bamboo [since] a long time ago — 2 millions years,” said Fuwen Wei, a wildlife ecologist at the Chinese Academy of Sciences in Beijing, who led the new research. Our results show the opposite, he added.

Pandas are distinctive. The giant mammals only live in the cool, high mountain forests of western China. And their black and white coats are as unique as their diet. To sustain their formidable size (the bears can grow up to 330 pounds), pandas pack away a whopping 26 to 84 pounds of bamboo plant everyday. But Fuwen and colleagues thought pandas’ might not have always been so specialized in their diet.

The researchers analyzed carbon isotopes from bones of modern pandas and other mammals that live in the area. The scientists used these carbon signatures to distinguish between carnivores, omnivores, herbivores and pandas.

Then, the researchers assessed the carbon content from the bones of 12 ancient pandas excavated from seven fossil sites in southern China, about 800 miles from where modern pandas live. The analysis revealed that ancient pandas once had a more diverse diet of herbivorous foodstuffs, but did not exclusively eat bamboo, the team reports today in the journal Current Biology.

The discovery shows that ancient pandas had a more complex diet than their modern day relatives. To become dedicated bamboo consumers, contemporary pandas went through two dietary transitions: first, from carnivore/omnivores to herbivores, and then to specialized bamboo feeders. Most surprisingly, giant pandas had not yet singled out bamboo as their exclusive main course by the mid-Holocene, about 4,000 to 6,000 years ago.

“Although the results reversed our common knowledge, we have to believe the unambiguous evidence we obtained from our research,” Wei said.

The researchers also assessed carbon and oxygen isotopes from the teeth of modern and ancient pandas. The analysis revealed ancient pandas might have once lived in a hot and moist subtropical habitat. Along with fossil records, the finding suggests ancient pandas’ range was once much more extensive. So the area modern pandas live in today is only a small part of what the animals once called home.

“The giant panda population might gradually [have] contracted to the current distribution due to abrupt climate change, lack of food resources and human interference,” Wei said.