Unraveling the Mysteries Under Our Very Feet

The farthest we have ventured inside our own planet got us only 0.4 percent of the way to the core. The inner earth has been terra incognita until some recent advances in peering deep below Earth's crust. 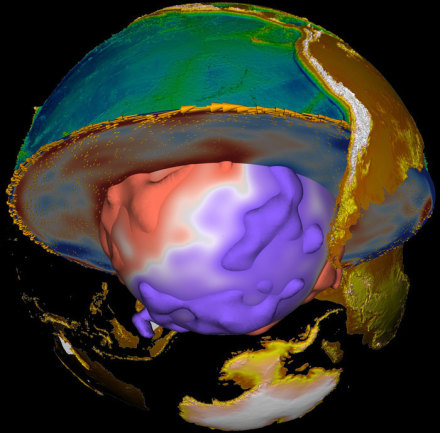 We have walked on the moon, sent rovers to Mars, and discovered planets light-years away. But the farthest we have ventured inside our own planet--the 7.6-mile-deep Kola Superdeep Borehole in the Russian Arctic--got us only 0.4 percent of the way to the core. The inner earth has been terra incognita, until now.

Using technologies analogous to medical CAT scans, geologists are virtually peeling back our planet's outer layers and exposing its internal life in exquisite, three-dimensional detail. To create this big-picture view, University of Southern California geophysicist Thorsten Becker used seismic tomography, which tracks waves produced by earthquakes as they travel around and through the earth. The model reveals the structure of the mantle--the thick shell of hot, compressed rock that lies between the crust and the core. The mantle, which makes up more than four-fifths of the earth's volume, is energized by radioactive heating within it and by the molten iron outer core below it. "As the core gives off heat," Becker says, "the mantle convects, moving sluggishly, like a pot of boiling honey." That slow churning, in turn, drags the crust with it.

Seismic waves move through relatively hot regions (red) more slowly and cold regions (blue) more quickly than through the rest of the mantle. By measuring the motions of those waves, Becker was able to create this thermal map, with the sphere in the middle showing the temperature at the deepest point of the mantle. (Lumps delineate the temperature anomalies; gold arrows denote how quickly different regions of the mantle and crust are moving, with the longest indicating four inches a year.) "Mantle convections drive plate tectonics," Becker says. "So if we want to understand anything that happens on the surface geologically, from mountain-building to earthquakes, we need to understand the deep movements of the mantle."

This gallery originally ran in the Invisible Planet special issue in July-August, 2011. 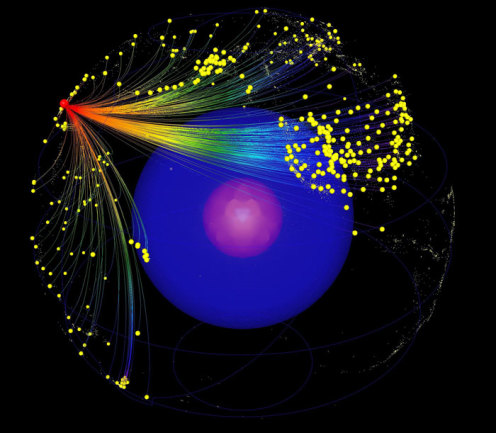 The image above shows the initial shudders of the 9.0-magnitude earthquake that devastated Japan in March, as registered by seismic sensors (yellow dots) across the world. From measurements like these, scientists can infer a wave's speed and determine if a structure within the earth slowed it down or sped it up. A network of seismometers concentrated in one region allows scientists to create detailed 3-D images of the interior beneath that area.

The readings clustered on the right side of the globe in the above image represent some of the 1,000-plus seismic stations deployed in North America. About 400 of those are part of EarthScope, a National Science Foundation-funded project that aims to understand when and how earthquakes strike. 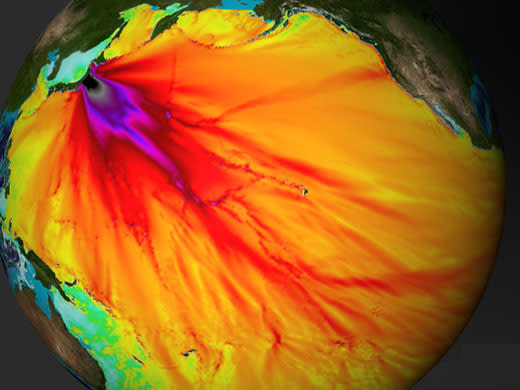 This image shows how seismic waves play out when they reach the surface: This elevation map depicts the wave height of the tsunami triggered by the Sendai earthquake as it radiated through the Pacific Ocean. 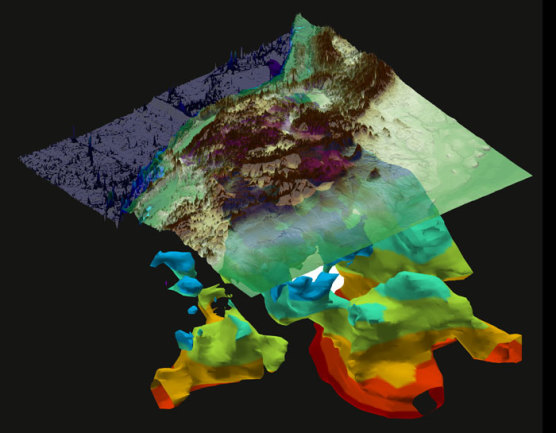 Today the crust is composed of eight major tectonic plates--the vast, irregular slabs of rock whose movements shift continents and sculpt mountains. One hundred fifty million years ago, the Farallon Plate covered more than one-third of the earth's surface. But at a rate of about an inch a year, the plate plunged beneath the western edge of North America, down into the mantle. The seismic image above, created by geophysicist Karin Sigloch of Ludwig-Maximilians University of Munich and based on data collected by EarthScope seismometers, depicts where the remains of that plate lie now.

Color-coded layers represent depth intervals of about 120 miles; at its deepest, the plate is 1,000 miles underground. Sigloch's study bolsters the theory that the Farallon Plate ground against the underside of North America and drove up the ranges of the Rockies, including the Elk Mountains in Colorado, shown at right. "By studying images of this plate deep underground," Sigloch says, "we can learn about conditions at the surface tens of millions of years ago." 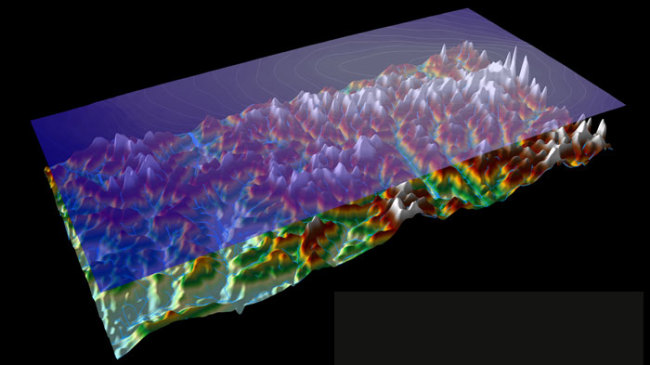 Columbia University geophysicist Robin Bell studies the planet's most enigmatic range: the Gamburtsev Mountains, buried beneath two miles of ice in East Antarctica. They were discovered in the 1950s during a Soviet seismic survey, but little research was done there until Bell and her colleagues arrived in 2008. Over two months, often working in -30 degree C temperatures, Bell's team crisscrossed over the invisible mountains in a plane equipped with ice-penetrating radar. The radar waves bounced off the rock beneath the ice; returning echoes yielded this contour map of peaks and valleys as well as hundreds of miles of interconnected subglacial lake systems. Colors indicate elevation, with white the highest.

After studying the map, Bell was stunned by what it revealed: The range of 9,000-foot-tall mountains, mighty as the Pyrenees, seemed to have sprung up out of nowhere. "Normally mountains arise where you've smashed continents together, or from volcanoes or subduction zones," she says. "But none of those exciting things seemed to have happened under Antarctica for hundreds of millions of years. That was the mystery." Now, using gravitometers and magnetometers, which measure fluctuations in gravity and magnetic fields, as well as deep-earth measurements from seismometers embedded in the ice, Bell is closing in on answers. "These images are revealing that there were perhaps some faults and other interesting things happening in places that are now covered with ice," she says. 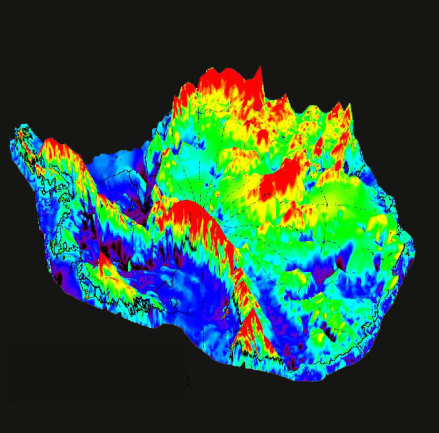 Below right, a broader map shows the elevation of all of Antarctica under the ice sheet. Blue areas lie well below sea level; red blotch to just to the right of the middle of the continent marks the Gamburtsev range. 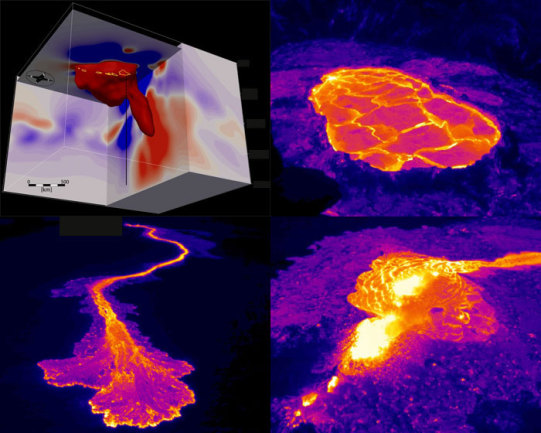 Since the 1970s, geologists have theorized that the Hawaiian Islands formed from magma generated by a hot, rising deep-mantle formation known as a plume. The theory was verified in 2009 when Cecily Wolfe, a University of Hawaii seismologist and a principal investigator of the PLUME (Plume-Lithosphere Undersea Melt Experiment) project, captured the deep plume in a 3-D worm's-eye view (top left) of the Hawaiian Islands (outlined in yellow). "We mapped the differences in temperature in the mantle and found that this cylindrical shape had slower seismic-wave speeds and was thus hotter than the background mantle," Wolfe says. "We found ourselves looking at the hot, upwelling plume that created the Hawaiian Islands."

As the plume moves surfaceward, it begins to partially melt, finally emerging as lava in volcanoes such as Kilauea, which features multiple craters. Three thermal images show a series of Kilauea eruptions earlier this year. Getting a clear picture of the plume was no easy task. The project required a dense, high-resolution network of seismometers surrounding the islands. So Wolfe and the PLUME team deployed an array of 70 retrievable seismometers on the ocean floor, which no major research group had ever done before.

"These ocean-floor seismometers are one of the best ways to access the earth under the oceans, and we need more of them," she says. "A lot of interesting things are happening beneath the ocean floor that we don't understand. It's a big unknown." 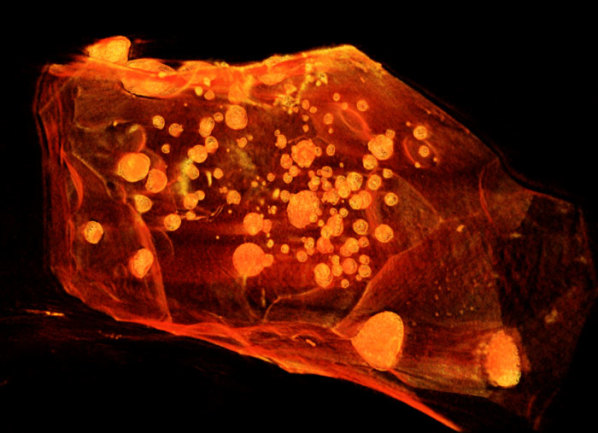 Seismic imaging can generate maps of the mantle, but geologists are not going to collect direct samples of those parts of the planet anytime soon. So some researchers are exploring the earth's deep interior by re-creating it in the laboratory. Last year, Stanford mineral physicist Wendy Mao simulated conditions in the upper mantle using a technique that could test theories about the formation of the earth's core. She subjected a cell-size mixture of iron-rich alloy and silicate to 60,000 times the atmospheric pressure at sea level. Then she heated the sample to 1800 degrees C and peered inside it with a series of X-rays to produce this three-dimensional image.

Mao observed that the iron melted into discrete spheres, visible here as bright circles in the darker silicate matrix. In future simulations she plans to crank up both temperature and pressure to find out if iron could have melted and trickled through the silicate mantle to give rise to the core some 4 billion years ago. An iron and silicate meteorite is thought to resemble the raw material from which the core formed.

"But in the lab," Mao says, "we can get a real window into the earth's interior."