Researchers find that the tale of the "Hero Twins" goes back more than 2,000 years. 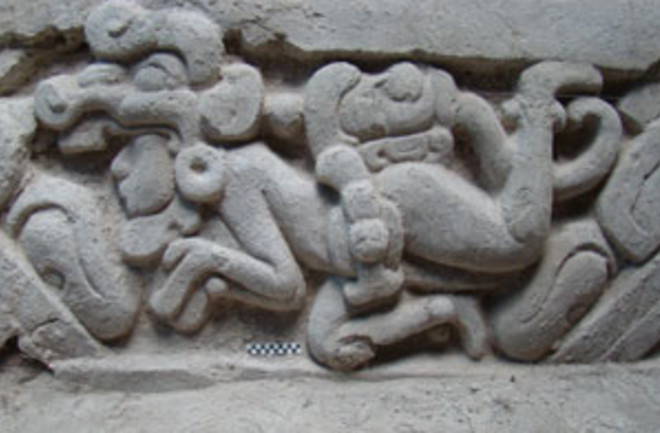 Archaeologists who have uncovered two massive carved stucco panels in the Mirador Basin of Gua­temala’s northern rain forest say they are the earliest known representation of the Mayan creation myth, predating other such artifacts by a millennium. According to the researchers, the panels—26 feet long and 20 feet high, with images of monsters, gods, and swimming heroes—date to 300 B.C. They formed the sides of a channel that carried rainwater into a complex system of stepped pools, where it was stored for drinking and agriculture.

Idaho State University archaeologist Richard Hansen, who is directing the ongoing excavation, says that the panels’ carved images depict an important scene from the Popol Vuh, a text of the Mayan myth that was first recorded in the 16th century. In the part of the story shown, the Hero Twins swim through the underworld after retrieving the head of their father, the deity Hun Hunahpu.

Some historians dismiss the Popol Vuh as a contaminated document, containing not only ancient Mayan mythology but also contemporary Spanish Catholic influences. The discovery of the panels establishes key portions of the stories as genuinely Mayan. “We can now extend the authenticity of the creation myth back another 1,000 years,” Hansen says.