Underwater Volcano Megaplumes May Carry Hardy Creatures Across the Ocean

Deep-sea volcanoes might have been instrumental in harboring and dispersing the earliest forms of life. 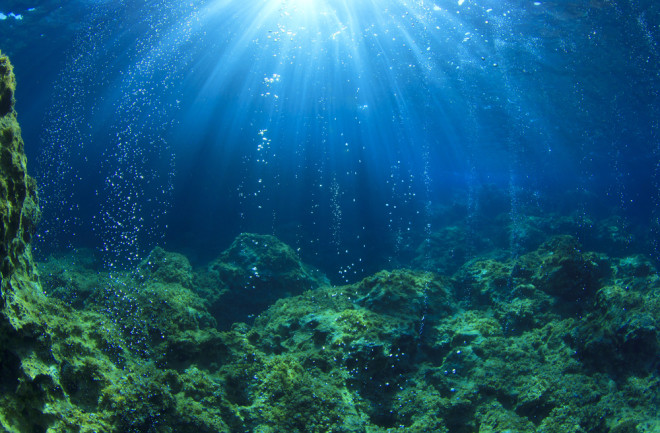 Images of some of the most infamous terrestrial volcanoes depict billowing clouds of volcanic ash and debris, which eventually fill the sky and rain down around us. Underwater, some volcanoes erupt in similar ways — producing megaplumes of super-hot liquids and gases that shoot up through the Earth’s crust and scatter debris throughout the surrounding ocean.

While this phenomenon is well-studied on land, the first so-called submarine megaplume was only discovered in 1986. Since then, the precise ways in which they act and affect their environment have largely evaded scientists.

In a study published in Nature last month, researchers from the University of Leeds used detailed maps of volcanic ash settlements in the Pacific Ocean to model how a megaplume formed from a nearby submarine volcano. Their analysis indicates that the heat transfer from expelling these materials equals around a terawatt — about double the energy required to power the U.S. at once.

Megaplumes seem to originate beneath the Earth’s crust, drawing out super-hot fluids and gases and releasing them into the surrounding ocean. This eruption may disrupt communities of bacteria and other microbes that live in hydrothermal systems beneath the crust.

These small life-forms are called extremophiles for their ability to live (and thrive) in environments with temperatures reaching over hundreds of degrees Celcius and containing high concentrations of chemicals that are poisonous to many other life forms.

Some scientists believe that the earliest forms of life on Earth originated in such extreme underwater conditions, long before the planet’s surface became habitable. Studying the ways in which these organisms currently live and travel throughout the ocean can help us understand how life formed on Earth — and how it might exist up in space.

“These life forms are not governed by the energy from the sun, they're governed by the energy from magma,” says David Ferguson, a volcanologist and geochemist at the University of Leeds Institute of Geophysics and Tectonics and a co-author on the study. Their work “shows the role of volcanic activity in the evolution of the planet geologically, and maybe even biologically,” he says.

“The problem is we almost never know when these megaplumes are forming because in many places in the world, we don’t have any way to detect them,” says Deborah Kelley, a marine geologist at the University of Washington School of Oceanography and expert in undersea earthquakes and hydrothermal vents.

Because no one has ever observed an erupting megaplume, scientists aren’t sure how exactly they begin. One possibility: Magma emerges and heats up the surrounding seawater enough to create a plume effect. But the researchers from the University of Leeds say that it’s unrealistic for a volcano to produce the amount of magma required to do so. It’s more likely, then, that hydrothermal fluids from under the Earth’s crust are thrust up and cause these plumes.

“We found it is so large that you can't actually realistically explain it from a purely surface-level lava heating mechanism, which suggests that actually it's primarily made up of crustal fluid,” says Sam Pegler, a fluid dynamicist at the University of Leeds School of Mathematics and co-author of the study.

Meanwhile, scientists have known for decades that life could exist near hydrothermal vents. In 1977, researchers undertook a deep-sea expedition to the Galápagos Rift where they first discovered vents in which hot, chemical-rich water nourished creatures like foot-long clams and massive tube worms.

Since the Galápagos discovery, scientists have discovered hundreds of different hydrothermal vents that extremophiles call home. One type of vent, called black smokers, may send hydrothermal fluid more than 500 feet up from the ocean floor before it spreads out and settles back down. Megaplumes, on the other hand, can shoot material more than a mile up.

“The difference with the megaplumes is that they involve such a huge emptying of these reservoirs, that you could think of them as kind of flushing out this hydrothermal system,” Ferguson says.

Some of the fluids that flow from under the crust, the researchers speculate, may harbor extremophile life. A researcher from University of Washington sampled fluids from the 2015 eruption of Axial Seamount off the coast of Oregon and compared them to the surrounding ocean. She found evidence of microbes in the water that leaked from the hydrothermal system, suggesting that these organisms could travel through megaplume liquids.

Kelley says this and subsequent studies indicate, “unequivocally,” that communities of microbes exist in deep biospheres on mid-ocean ridges and that megaplumes can uproot them.

How easily such organisms can survive in a new environment, however, remains unclear. When a hydrothermal system erupts, the host water may mix rapidly with the much colder sea water. And the chemicals and gases that microbes feed from may disperse or change: For instance, hydrogen, an element that serves as a crucial energy source for many subsurface microbes, oxidizes within a day when introduced to the ocean water.

Once megaplumes displace these organisms and send them streaming through the ocean, it’s uncertain whether they could survive the journey. Some scientists speculate that they could settle in an appropriate environment and re-establish themselves. But this possibility requires further research.

“[Megaplumes] are super ephemeral — they probably form incredibly rapidly, and they entrain microbes from beneath the sea floor. But these organisms require nutrients, chemicals, gases and temperatures that are not in the background ocean waters,” Kelley says.

The origin story of life on Earth still puzzles scientists. But when it comes to dispersing early life forms across the ocean, megaplumes may have played a key role. Pegler says that it’s “much more plausible” that megaplumes, rather than black smoke systems, were able to diffuse biological material ocean-wide.

With technological advancements, like the use of underwater fiber optics cables and autonomous underwater vehicles, megaplumes may become far less enigmatic: Scientists may soon be able to predict and directly observe megaplumes. “This form of venting — this rapid evacuation — may actually be common,” Pegler says. “It may be happening more than one might think.”