Understanding the Amazon By Digging Into the Ground Beneath It

To unlock the Amazon's secrets, one scientist has immersed himself in its silty sediments. 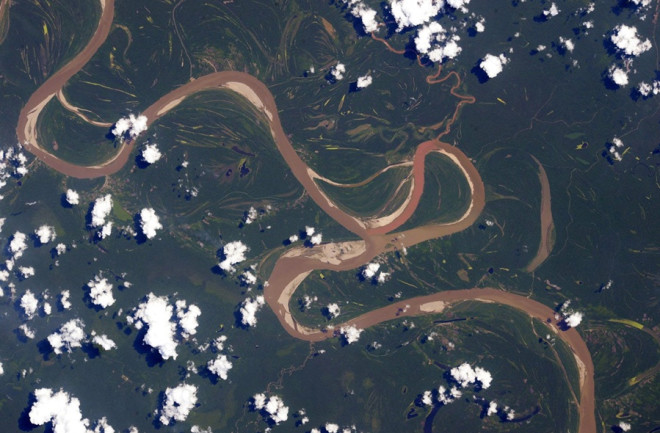 Brown sediment fills the Ucayali River as it snakes through a remote and verdant part of the Amazon basin in eastern Peru, photographed by an astronaut on the International Space Station. (Credit: NASA)

Unseasonable rains deluged Peru’s northern coast in 2017. Months of downpours unleashed cascades of mud and water, washing away neighborhoods and killing 162. Tens of millions were left to marvel at — or bemoan — the water’s force.

But Jorge Abad had a different take. Poring over aerial photos of rivers overflowing their banks and burying crops under a layer of silt, he says, “It’s not the water — it’s the sediment.”

Most people think of rivers as waterways, but a river wouldn’t be a river without the particles of sand, soil and clay carried by the current. Fine sediments, suspended in the water, give rivers their muddy hue. Coarser particles sink to the bottom, where they scour the river’s course, cutting a deep canyon down a mountainside or forming lazy loops across a flat landscape.

For millions of years, huge amounts of sediment washing down from the Andes have fertilized flood plains on both sides of the range. On the west flank, occasional flows triggered by infrequent El Niño events allowed early civilizations to flourish. On the eastern side, annual pulses serve up nutrients for the Amazon basin.

Humanity has tampered with these natural flows. Dams and river dredging disrupt rivers in ways that scientists cannot yet predict. But researchers hope a better understanding will let them forecast how rivers behave during extreme events, like the El Niño rains of 2017, says Abad, the director of environmental and civil engineering at the University of Engineering and Technology in Lima.

“Every river has its own personality,” he says. And over the past eight years, Abad has measured and modeled many aspects of the Amazon’s personality.

As a teenager, Abad envisioned himself as a civil engineer, working with roads and supervising construction projects. But a course in hydraulic engineering shifted his attention to water. When he moved to the United States for graduate school, he planned to study landslides, which were frequent — and sometimes deadly — occurrences near his hometown of Huancayo, Peru. But the topography around the University of Illinois at Urbana-Champaign changed his plans.

“Illinois doesn’t have landslides,” he says, so he turned his attention to rivers, developing mathematical models to predict how they would behave under different circumstances.

Originating in the Peruvian Andes, mountain streams and winding rivers feed into the mighty Amazon (thicker line). The full Amazon River basin stretches across South America, feeding into the Atlantic Ocean on the coast of Brazil. (Credit: Alison Mackey/Discover; base map by AridOcean/Shutterstock; globe by hibrida/Shutterstock)

When Navy officers in Iquitos, a Peruvian city accessible only by river or air, asked him to model the behavior of Amazonian rivers, he jumped at the chance. To develop a model, though, he needed accurate information, and there was a dearth of data.

Since 2010, he has been collecting systematic measurements of the Amazon and its tributaries, including the Marañón and Ucayali rivers, which join to help form the Amazon near Iquitos. These studies reveal where rivers escaped ancient channels to reshape the landscape. They also raise red flags for the future.

Andes to the Amazon

Early one morning in March, Abad and three young assistants set off in a motorboat from a pier in Yurimaguas, a port city on the Huallaga River. Starting high in the Andes Mountains, the Huallaga takes on a cappuccino color as it picks up fine, mineral-rich particles of soil and clay on its downhill journey to the Amazonian plain.

During the rainy season, from February to April, Amazonian rivers overflow their banks and spread those fine sediments into the forest and lakes, where fish spawn. When the floodwaters gradually recede, they leave behind silt, fertilizing the forest.

So huge is the sediment load, and so mighty the current’s force, that during the rainy season, a brown, nutrient-rich sediment plume extends more than 1,000 miles from the mouth of the Amazon into the Atlantic Ocean.

Jorge Abad (left) and an assistant release a small pontoon boat carrying a Doppler radar device that will read the topography of the Huallaga riverbed. (Credit: Barbara Fraser)

Leaning over the bow of the boat on the Huallaga River, Abad and an assistant lower a metal cylinder into the water. A jerk on the rope snaps the cylinder shut, trapping water and fine sediment, which they pour into a bottle. They sample sandy sediments by drawing a heavy, hollow scoop shaped like the base of a torpedo along the riverbed.

They measure the river’s flow and velocity, as well as take time-lapse images of the river bottom. Later, in the laboratory, they will measure the grains of silt and sand and analyze their chemical composition.

Abad and his team also peer through the murky water and detect the river bottom with a small Doppler radar riding on pontoons. As the microwaves bounce off the riverbed some 30 feet below, an unusual shape appears on their laptop computer screen.

“That’s a giant dune,” says Abad, pointing to a sand dune nearly 10 feet high and more than 300 feet long. “That’s something that has never been measured here.”

Coarse sediments at the river bottom make up only about 10 percent of the Amazonian rivers’ sediment loads, but that is still an enormous amount of sand. It forms row upon row of huge dunes that move slowly downstream.

“Whenever we go to the field, we learn a lot,” says Mishel Meléndez, 25, a civil engineer on Abad’s team. “One of our goals is to have a database of sediments.”

Their work has provided the first glimpse of the forces behind the constantly shifting form of Peru’s Amazonian rivers. Once the team’s measurements are complete, they will be able to develop models to predict some of those changes.

Some rivers, like the Ucayali, meander across the landscape in wide loops. Over time, the river’s course will straighten, cutting off a loop and leaving a crescent-shaped body of water called an oxbow lake. If a village is built on the meander, the cutoff isolates it from the main river channel, which is the only transportation route in this roadless part of the world.

Models let researchers predict when a meander might cut off, giving villagers time to plan. In one case, a town that depends on fishing will soon be isolated by shifting meanders. In another, dredging to improve navigation could affect forests, fish and indigenous communities upstream and downstream in ways planners have not foreseen.

The narrow channels of the Marañón and the Amazon leave little room for the rivers to meander, so they dissipate their energy by forming smaller channels around islands every 16 miles or so. Scientists aren’t sure why they’re spaced at that distance, or if these features might change with potential future dams or drought. But Abad hopes his data can solve some of these Amazon mysteries.

“I used to study small water channels, in the laboratory, more theoretically,” he says. “When I saw the Amazon, in all its complexity, I realized how little I was studying compared to what I could measure here. This is the most beautiful natural laboratory I could have.”

This article originally appeared in print as "A River Runs Through It."