To discover the evolution of the bacterial residents we host, a new field of research delves deep into unexpected corners of our fossil record. 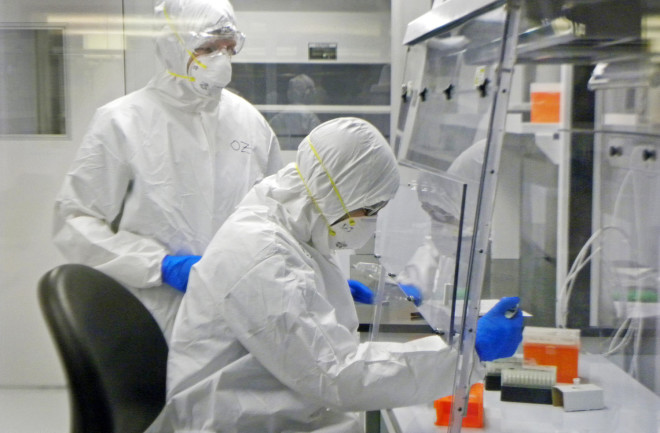 In the gleaming new Laboratories of Molecular Anthropology and Microbiome Research, opened in 2014 at the University of Oklahoma, positive air pressure keeps out external contamination, and intense ultraviolet lamps are on standby to sterilize the lab between uses. The focus of work here is not for the squeamish: Lab co-directors Christina Warinner and Cecil Lewis Jr. are digging into fossilized feces and dental plaque from long-dead humans, seeking traces of DNA from the trillions of bacteria the bodies hosted in life — just like we do today.

Collectively known as the microbiome and located primarily in the large intestine, these cohabitants outnumber their host human cells at least 10 to 1. Although scientists have known of this bacterial horde for years, it’s only recently that we’ve begun to understand its crucial role in human well-being. Some research has even suggested a link between off-kilter microbiomes and the increase in many “diseases of civilization,” such as obesity, asthma and Type 2 diabetes.

Thanks to powerful gene-sequencing techniques developed in the past two decades during the race to decode the human genome, researchers are beginning to reconstruct what our ancestors’ microbiomes looked like, potentially going back thousands of years. For the first time, we’re learning about the evolution of the 90 percent of us that isn’t, well, us.

Toay, researchers look to the microbiomes of people still living in traditional societies, such as the Yanomami, for clues about the bacterial colonies of our pre-industrial ancestors. | Odair Leal/Reuters/Corbis
An eighth-century coprolite, or fossilized feces, from a cave in Mexico provided the first evidence of an ancient human microbiome. | Raul Tito

Ancient DNA analysis of microbiomes is in the early stages, but numerous studies of the microbiomes of today’s traditional societies hint at what researchers may find.

For instance, recent research strongly suggests that in modern urban populations, the human microbiome has undergone major changes since the Industrial Revolution. It’s possibly due to the rise in processed food, along with widespread antibiotic drug use and sanitation, all of which curtailed our microbial exposure. “We have far less interaction with microbes than we used to,” says Warinner.

Consider a March Nature Communications study by Lewis and Warinner’s team at OU. They compared fecal samples, loaded with gut microbiome members, from three groups: Amazonian hunter-gatherers and Andean farmers, both living in Peru, and an industrialized population in the U.S. Each group possessed distinct microbiomes with varying types of bacteria, but the American population stood out for having both different and less diverse critters. This same trend has turned up in other studies of remote South American and African populations as well. “If you look at the big jumps in the different microbiomes, it’s not between hunter-gatherers and agriculturalists — it’s between both of them and us, the industrialized,” says Warinner.

An April study in Science Advances drove this point home: A separate team found the highest human microbiome diversity ever seen in an isolated Yanomami tribe, discovered by Westerners only in 2009 in southern Venezuela.

These studies of present-day bacterial diversity are valuable, but to tell the whole story of the human microbiome’s evolution, researchers must turn to fossilized feces, or coprolites, and tartar caked onto ancient teeth.

Among human archaeological remains, coprolites can be a uniquely valuable record of ancient gut microbiomes — but they’re rare to find. In typical, relatively humid and warm environments, stool quickly breaks down. Yet in cool, arid conditions, such as dry caves, excreted feces can preserve bacterial DNA for centuries.

In 2008, Lewis and a team analyzed two coprolites from a Mexican cave. The samples were found in a sandy heap, doubling as a refuse dump and burial site, and had been sealed with adobe mud. The coprolites’ exquisite preservation allowed the scientists to make the first confirmation of an ancestral, distinctly human microbiome, dating back to about A.D. 700. “These bacteria were clearly members of the gut,” Lewis says.

Neanderthals hold the record for the oldest hominin coprolites to date, plopped 50,000 years ago in a fire pit in El Salt, Spain.

In 2012, analyzing two other coprolites from the same site, Lewis and colleagues found that the ancient Native American microbiomes overall corresponded to modern, rural examples from traditional peoples in Africa, but not to industrialized bowel bugs. The team was even able to estimate the age of one of the human hosts from one sample’s recovered bacterial DNA. One coprolite contained high levels of Bifidobacterium breve, often found today in breast-fed infants, and microbes in the genus Prevotella, linked to a carbohydrate-rich diet. Children in rural Africa commonly have these microbes in abundance as well, suggesting that the Mexican coprolite may have been that of a young child.

Deciphering the microbiome of yesteryear can extend to human ancestors, too, even extinct hominins. Neanderthals hold the record for the oldest hominin coprolites to date, plopped 50,000 years ago in a fire pit in El Salt, Spain. The feces contained traces of fats typically produced during digestion by bacteria that are found in microbiomes of omnivores. In other words, it looks like our Neanderthal cousins were probably consuming meat as well as vegetables. Although this particular coprolite sample has not been probed for the identities of its resident bacteria, Warinner says, as only a scientist could about fossilized poop: “I’d love to analyze it.”

A Tale Told in Teeth

Unlike rare, serendipitous coprolites, teeth turn up all the time in archaeological skeletal finds. Tartar, also called calculus, accumulates on teeth throughout our lives, spackling over clinging oral bacteria and bits of food. “Calculus builds up kind of like an onion,” says Warinner. “And what’s extraordinary about it is, it actually fossilizes while you’re still alive.”

Calculus is tough stuff, as any dentist with their scraping tools can tell you. Like bone, it lasts for ages. “We can expect to find calculus even on very ancient samples,” says Amanda Henry of the Max Planck Institute for Evolutionary Anthropology in Germany. Henry studies glasslike particles, known as phytoliths, from plants eaten by hominins and sealed in their teeth tartar. She has picked through calculus from the early hominin Australopithecus sediba, dating back 2 million years. Now Henry is collaborating with Warinner to try to recover DNA and RNA from these samples. The researchers are also scrounging around for proteins, which can linger 10 times as long as DNA in tartar and provide hints of microbiota signatures.

“At this point, we have tantalizing glimpses,” says Warinner. For instance, a breakthrough 2013 study by Australian scientists compared modern dental calculus to that of a small set of European skeletons spanning some 8,000 years, from the Stone Age through the late medieval period. As with gut bacteria, the researchers found that, in general, our ancestors had higher levels of oral bacteria diversity than we do. They also found that the earliest hunter-gatherers sampled in the study, before the rise of agriculture, had fewer types of oral bacteria associated with gum disease and cavities than later individuals. As agriculture became widespread, calculus bacterial colonies shifted away from those of hunter-gatherers, and periodontal disease increased.

The study identified another significant change in oral bacteria: In the calculus of modern Australians sampled, the tooth decay-causing Streptococcus mutans was dominant — but not so in the earlier samples. The researchers suspect S. mutans became more prevalent as consumption of processed grains and sugars increased after the Industrial Revolution.

At this preliminary stage of ancient microbiome research, many findings make it sound like humanity has fallen from a primordial, pre-technological grace. But Lewis and Warinner agree it’s way too early to dive into trendy paleo diets or consider abandoning unquestionably life-saving antibiotics. The overall evolutionary story of the human microbiome — and any cautionary tales therein — will likely prove as complicated as the rise of our species itself, for we are one and the same. “Only by exploring our microbiomes today and in the past,” Warinner says, “can we fully understand what it means to be human.”

[This article originally appeared in print as "Gut Reaction."]