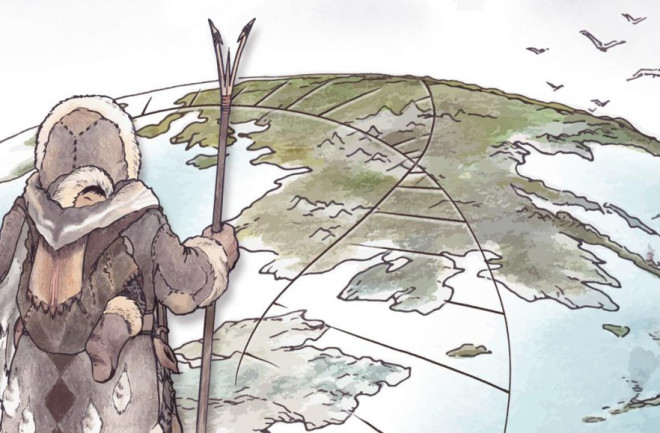 Who were the First Americans? It’s a question that for decades has divided researchers, who have proposed competing theories as to how humans moved from Eurasia into North America.

The question is far from settled, though it is clear that by about 14,500 years ago (and perhaps as far back as 30,000 years ago) humans had moved from Siberia to present-day Alaska and begun to spread throughout the Americas.

Now, two new studies published simultaneously in Nature are giving some more insight into who those First Americans might have been, in addition to information about later waves of migration that contributed to the Native Americans and the genetically and culturally distinct Inuit still in the region today.

Two teams of researchers, one led by Pavel Flegontov, from the University of Ostrava in the Czech Republic, and the other by University of Copenhagen geneticist Martin Sikora, used information from ancient genomes to piece together some of the broad population movements that brought successive waves of humans to North America.

They found the process was more complex than previously thought, involving multiple waves of migration and interactions between different groups at various stages. But the work is revealing some of the nuanced history of present-day native populations in the Americas, information that helps tie their lineages to the grander epic of human migration across the globe.

The more ancient part of the story begins with the Sikora paper, which compiled data from 34 ancient genomes across Siberia and northern China ranging from 31,600 to 600 years ago. Analyzing and comparing these genomes to each other, the researchers identify an initial population of humans called the Ancient North Siberians that moved into north-eastern Siberia about 38,000 years ago.

Then, around 20,000 years ago, a group of East Asians moved north and intermixed with these people to create a new lineage that would begin moving east into the then-dry Bering Land Bridge connecting Siberia to the Americas. This is the group of people that would give rise to the First Americans. The authors estimate the First Americans split off from other Siberian populations around 24,000 years ago, which is consistent with some of the earlier predictions for when the Americas were first settled.

Not everyone was destined to be a First American, though. Some of those ancient Beringians stuck around near the land bridge, becoming what the authors call the Ancient Paleo-Siberians.

A portion of the Ancient Paleo-Siberian population would later move back into Siberia and mix with groups there, while others would stick around and become part of later migrations into North America. Those that moved onwards to North America are called the Paleo-Eskimos.

Flegontov and his team pick up the story of those ancient Eskimos around 5,000 years ago, using a different group of 48 genomes from ancient individuals across the American Arctic and Siberia spanning from around 7,000 years ago to just a few hundred.

Five thousand years ago, the Paleo-Eskimos moved into North America, interbreeding with people already there who had descended from the First Americans. Traces of this migration show up today in the genomes of Inuit people from the region.

But there was another, even more recent migration to the region that’s evident in the genomes of modern Inuit as well. Around 800 years ago, yet another wave of Siberians crossed from Beringia to Alaska and integrated into the Inuit populations there. The present-day Inuit, then, are a mosaic of at least three migrations from Siberia to the Americas, each successive wave intermingling with the peoples already there.

The main takeaway from these studies, and others looking at the history of human migration, is that the process of human expansion is gradual and far from linear. Humans crossed from Siberia to the Americas on multiple occasions, and each wave of new arrivals was integrated into the people already living there. There’s also evidence that people crossed back from the Americas and Beringia to Siberia — a reverse migration that belies the notion of constant human expansion.

Multiple waves of humanity built the native populations that live in the far north today. Their genetic history is rich and varied, but large parts of it are still unknown. There is likely further work to be done to understand the cultural diversity of these ancient people, from the most ancient Siberians through to the more recent Paleo-Eskimo populations. Tying evidence from archaeological digs, including bones and cultural artifacts, to the genetic data will begin to add that depth.

Perhaps soon we’ll begin to know just who these peoples were, who braved the Arctic cold as they set out across unknown frontiers.