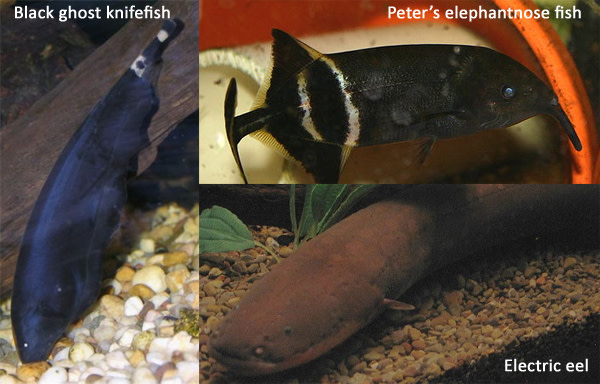 The rivers of Africa and South America are full of shocking conversations. Both continents are home to fish that can talk to each other using electric fields: the elephantfishes of Africa, and the knifefishes of South America (including the famous electric eel). Both groups live in dark, murky water where it’s hard to see where you’re swimming. Both have adapted by using electricity to guide their way. Their bodies have become living batteries and their muscles can produce electric currents that help them communicate, hunt, navigate and court. But both elephantfishes and knifefishes evolved their electric powers independently. Their common ancestors had no such abilities. They are a great example of how two groups of animals, faced with a similar problem, can arrive at the same solution. And this similarity is all the more striking because it is based on the same gene. For a fish, it seems there are only so many ways to be electric. Matthew Arnegard from the University of British Columbia has found that the shocking skills of both elephantfishes and knifefishes depend on a gene called Scn4a. The gene produces proteins that sit on the surface of muscle cells and act as gates. When they are open, they allow positively charged sodium atoms to cross the cell’s boundaries, causing the muscle to contract. This happens whenever we move, whenever our muscles flex. How do you go from such an ordinary event to actually producing electricity? It turns out that it’s all in the timing. Electric fish produce currents using special cells in their tails called electrocytes, which are stacked in rows like the cells of a battery. Electrocytes are close relatives of muscle cells, and they too are laden with sodium-channelling gates. The big difference is that all of their gates open at the same time. This simultaneous ‘firing’ produces a very strong voltage. In the electric eel, it’s strong enough to kill; in other weaker species, it’s enough to communicate with. Both elephantfishes and knifefishes produce electricity in the same way. Scn4a’s role in all of this makes sense. It produces gates that are an important part of both contracting muscles and firing electrocytes. But there’s a problem with this story – Scn4a is so important that it’s not a gene that can be lightly tinkered with. When people inherit a faulty copy, they tend to develop severe muscle disorders that prevent them from relaxing their grip or walking properly, and sometimes even paralysing them. Fish, however, have got round that problem. Evolution can tinker with their Scn4a all it likes because fish, through a fluke event, have two copies. A few hundred million years ago, an ancestral fish somehow ended up with two copies of its entire genome, doubling the number of genes that its descendants would inherit. These duplications often happen and they provide raw fuel for evolution. By creating back-up copies of important genes like Scn4a, they allow the originals to be tweaked with few consequences. Modern fish actually have two related copies of Scn4a, catchily named Scn4aa and Scn4ab. It’s the former that both groups of electric fish have independently co-opted to produce their chatty currents. Arnegard studied many species of electric fish and found that, as they grow up, Scn4aa is hardly used in their normal muscles but strongly activated in their electrocytes. That’s true of both elephantfishes and knifefishes, but not of their relatives without electric powers. Arnegard also looked at how the gene changed as these fish evolved. After the electric fish started to diverge from their static relatives, their copies of Scn4aa started to change rapidly. Not only that but these changes were major ones; they affected the very structure of the gate protein that the gene codes for. In both electric dynasties, Scn4aa was evolving fast. By contrast, its counterpart Scn4ab showed no signs of such dramatic changes. Of course, the vast majority of fishes have two copies of Scn4a, so why did only the elephantfishes and knifefishes put one of their copies to use in producing electricity? You could argue that both these groups had a clear need for such an ability because they live in murky water, but so do many other fish. Rather, Arnegard thinks that the real reason is that both of these groups had already evolved to sense electric fields. From there, it was a simple step towards actually generating the fields themselves. In both cases, Scn4aa was the right gene for the job – the back-up gene that allowed two groups of fish to find the same new way of chatting in the darkness. It has certainly been a successful strategy for them. Today, there are around 150 species of knifefish and 200 species of elephantfishes. Reference: PNAS http://dx.doi.org/10.1073/pnas.1011803107Images by GnathoMichel, Derek Ramsey, and Vsion. More on gene duplication: