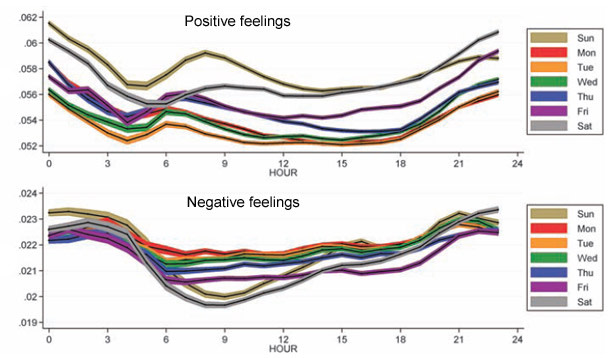 Twitter is either an indispensible professional and personal tool, or the downfall of humanity, depending on who you believe. But to Scott Golder and Michael Macy from Cornell University, it is something more: an unparalleled source of data. The duo has used the popular social networking site to eavesdrop upon the world’s moods, as they rise and fall throughout the day and across the week. By analysing half a billion tweets from 2.4 million people in 84 different countries, they turned Twitter into a giant global mood ring. They found that, on average, people wake up in a good mood, which falls away over the course of the day. Positive feelings peak early in the morning and again nearer midnight, while negative feelings peak between 9pm and 3am. Unsurprisingly, people get happier as the week goes on. They’re most positive on Saturdays and Sundays and they tend to lie in for an extra two hours, as shown by the delayed peak in their positive feelings. The United Arab Emirates provide an interesting exception. There, people work from Sunday to Thursday, and their tweets are most positive on Friday and Saturday. This might seem obvious, but previous studies have arrived at conflicting results about our mood cycles. For example, psychologists have variously said that positive feelings peak: just once, 8 to 10 hours after waking; once at noon and once in the evening; and once in the afternoon and again in the evening. Different studies have also claimed that negative feelings are most common in the morning, afternoon or evening... or don’t have any daily cycles all! Most of these studies involved small numbers of American undergraduates, who were asked to remember their feelings hours or days ago. These small samples and imprecise measures might explain why the results have been so inconsistent. On top of that, students are hardly representative of the wider population, especially since they’re constrained by academic schedules. Twitter was an obvious way of circumventing these problems. It’s popular around the world, people use it to voluntarily report their feelings without any reminders, and they do so in a timely (and time-stamped) way. The experimenters don’t ever have to prompt or even meet their volunteers. They just sit back and collect the data. This is the second study to use Twitter to track broad changes in mood. The first focused solely on the United States and although widely reported last year, it has not been published yet. Golder and Macy’s attempt is larger in scope. They sampled 400 English tweets from every Twitter account created between February 2008 and April 2009. The messages – around 509 million of them – spanned two years. The duo analysed them with a programme called Linguistic Inquiry and Word Count (LIWC), which hunted for words that betray a number of different positive and negative feelings. The programme’s vocabulary is calibrated using texts from journals, novels, conversation recordings, blog posts and more, in both American and British English. It may not be up-to-date with the latest internet slang, but it’s certainly diverse in its scope. You might think that counting positive and negative words is a fairly crude way of looking at tweets. For example, the programmes might recognise “good” as being positive, even if it was part of a neutral phrase (“good morning”) or a negative one (“not good”). But Golder and Macy found that both of these misdirecting uses are far less common than people might assume, and certainly too rare to skew the results. For example, “good” appears in 1 in 20 tweets, but it’s only preceded by “not” in 1 in 2000 of them. Likewise, including smileys and emoticons did little to change the shape of the world’s moods. The mood graphs suggest that sleep gives us a chance to reboot our moods from the stress of a working day, and weekends are doubly refreshing for our emotions. And people show the same emotional cycles around the world even though they might come from different cultures and countries (including the UK, USA, Canada, India, Australia, New Zealand and various African nations). 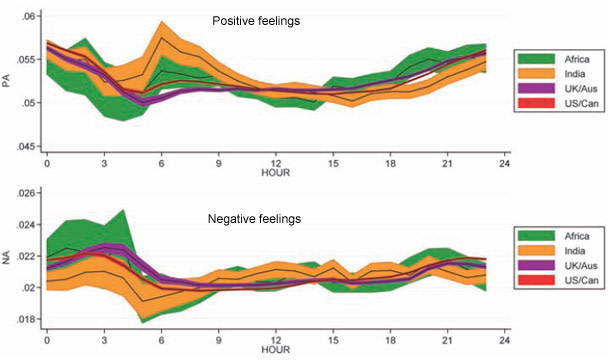 By looking at when people were most likely to tweet, Golder and Macy separated their sample into morning people, afternoon people, evening people and night owls. The first three groups were fairly similar in their mood cycles, but the night owls – who were most active between midnight and 6am – were very different. Their morning peak of positivity happened two hours after everyone else and they didn’t have a second peak at night. Instead, they had two peaks of negative feelings – once in the morning when everyone else’s negative feelings are ebbing, and another later at night. 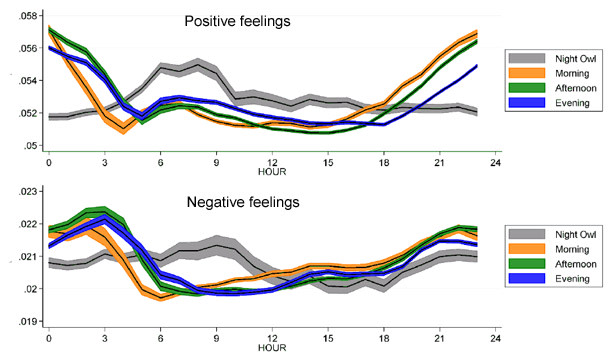 Golder and Macy also looked at how the tweets varied with the seasons. The length of the days had no effect on their emotional content; instead, it’s the relative change in daylight hours that matter. Our tweets are (very slightly) more positive at the spring equinox, when the days start to lengthen more quickly, than at the summer solstice when the days are actually at their longest. Negative feelings, however, don’t seem to change with the seasons. The fabled “winter blues” are more due to fewer positive feelings than more negative ones. Relying on tweets raises its own problems, but this is still a decent step beyond small, questionnaire-based studies. Twitter’s users are not representative of the general population, but they certainly represent a broader spectrum of society than American college students. Tweets only show the emotions that people are willing to express, rather than the ones they actually feel, but you could say the same for the questionnaires used in most psychological experiments. The data set is not perfect, but it compensates for that in its size and breadth. Looking at the world’s moods may be a simple first step, but Golder and Macy have demonstrated how scientists can mine social networks for data on those slipperiest of experimental subjects: people. Reference: Golder & Macy. 2011. Diurnal and Seasonal Mood Vary with Work, Sleep, and Daylength Across Diverse Cultures. Science http://dx.doi.org/10.1126/science.1202775