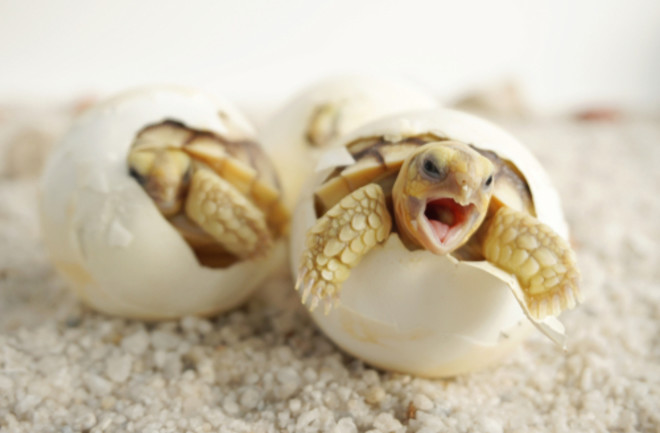 Turtles, tortoises (shown here) and other reptiles change sex inside their eggs depending on the outside temperature. That trait has scientists worried that climate change may skew their populations toward one gender. (Credit: Seasoning17/Shutterstock)

Freshwater turtle nests dot the sandy shores of ponds throughout Asia. And like many reptiles, the embryos become males or females depending on how warm or cool their nests are. Females like it hot, scientists have noticed. That is, when it’s warm, the incubating turtles become females. Males develop in cooler temperatures. The same is true for crocodiles and lizards.

As temperatures rise across the globe, researchers worry the hot conditions will skew turtle populations to an all-girls club. The possibility could spell the end of reptiles that rely on temperature to influence the sex offspring become.

But in new research published this week, researchers say they’ve discovered that turtle embryos actually move around in their eggs to control what sex they become. The discovery suggests the reptiles are more resilient to climate change than scientists thought.

“The discovery of this surprising level of control in such a tiny organism suggests that in at least some cases, evolution has conferred an ability to deal with such challenges,” said Wei-Guo Du, an ecologist at the Chinese Academy of Sciences in Beijing, who led the new study.

Du and his team already knew that reptile embryos move about within the cramped confines of their egg. In previous research, they found turtle embryos seek out warm spots to “bask” inside their eggs. But these movements did not influence sexual development. Like adult turtles seeking sunshine to control their body temperature, the embryos sought the relatively warmer parts of the egg. If it was too hot, they moved away to cooler spots. But why the embryos might move around in the egg remained unclear.

The researchers treated turtle eggs with a drug called capsazepine that blocked the embryos’ ability to sense temperatures. As a result, the embryos did not move as much as embryos that did not receive the drug. During the relatively cool period of the breeding season in May, all embryos treated with capsazepine hatched as males. In June, when it was hot, only females were born, the team reports Thursday in the journal Current Biology. In contrast, embryos that could react to nest temperatures and move around inside their eggs developed into males and females in an approximate 50:50 split.

The researchers then built a model to forecast how climate change will affect the male: female ratios of freshwater turtles in China. The results suggest that turtles embryos may be able to buffer their populations against climate change by moving inside their eggs. Their success, however, depends on how much vegetation there is above nests to provide cool shade and how much the climate changes. If temperatures rise too much, embryos’ movements inside the egg may not help.

“The embryos’ control over its own sex may not be enough to protect it from the much more rapid climate change currently being caused by human activities,” Du said.