Turtle embryos bask against the warmest side of their own eggs 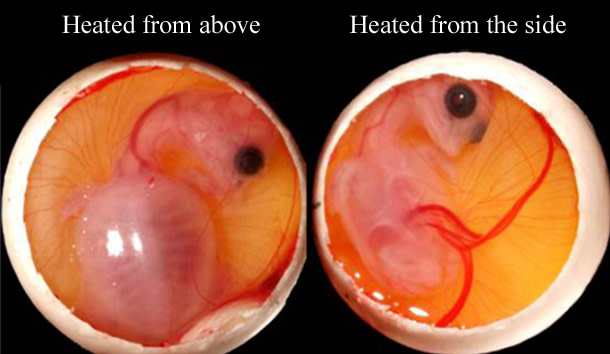 Many animals, including the majority of reptiles, cannot produce their own body heat. To control their temperature, they have to use their environment. They bask in the sun to heat up and lounge in the shade to cool down. And some of them start before they’ve even hatched. Wei-Guo Du from the Chinese Academy of Sciences has found that the embryos of soft-shelled turtles “bask” inside their eggs. “People usually think reptilian embryos are immobile,” says Du. After all, their limbs are tiny stumps and they have few places to move to. But that doesn't stop them. Du found that the embryos can not only move, but they can snuggle up to the warmest side of their eggs. He collected 260 eggs from a local turtle farm, placed them in individual jars and warmed them with heat lamps. The eggs were about one degree Celsius warmer on the sides closest to the lamps, and the turtles could sense this. After a few days, they had pressed up against the warmer side. When Du moved the heat lamps around, the embryos followed. Du also buried 540 eggs in more natural nests, either in a flat field or a sloping river bank. He arranged all the eggs so the embryos were sitting in the uppermost half (he could tell where they were by shining a candle behind them and looking at the silhouette). After 20 days, the embryos in the field, with the sun warming them from directly overhead, stayed in the same position. However, the embryos buried on the slope, with the sun shining down on them at an angle, shifted towards the bank. Do these results have any relevance to natural conditions? Du thinks so. “Most reptiles lay eggs in underground nests, which are heated by sunlight falling on the ground above,” he writes. These can create uneven temperatures within the nest – some eggs will be warmer than others and some parts of each egg will be warmer than other parts. Soft-shelled turtle embryos can sense these differences and respond to them, basking in the warmth before they’re even hatched. “To our knowledge, no previous study has looked for this ability, presumably because embryos were thought incapable of such behaviour,” says Du. A small difference in temperature can mean the world to a developing turtle. It can affect how quickly it grows, how big it gets, and when it hatches. Heat a turtle embryo up by one degree – the temperature difference that Du found in his experiment – and it will hatch around 4.5 days earlier. That’s 4.5 days when it won’t be a sitting duck for egg predators, and when it can escape from extremes of temperature or drought. Mother turtles may decide where to bury the eggs, but the embryos aren’t passive. By moving about in their cramped homes, they have a small say in their own fates. Du says, “The embryo is not simply a work in progress, but is a functioning organism with surprisingly sophisticated and effective means of affecting its own destiny.” This discovery raises a tantalising possibility. For many reptiles, the temperature of the egg determines the sex of the babies. In some turtles, if eggs are incubated at 22.5 to 27 degrees, the babies will be all male. If they’re incubated at 30 degrees, they’ll all be female. Temperatures in the middle will yield a mixed-sex clutch. For the moment, Du doesn’t know if the soft-shelled turtle relies on temperature in this way, or if other reptiles that do rely on temperature can move about in their own eggs. If either statement is true, then they may be able to control their own sex. Reference: Du, Zhao, Chen & Shine. 2011. Behavioral thermoregulation by turtle embryos. PNAS http://dx.doi.org/10.1073/pnas.1102965108More on reptiles and temperature: