Your hands are, roughly speaking, 360 million years old. Before then, they were fins, which your fishy ancestors used to swim through oceans and rivers. Once those fins sprouted digits, they could propel your salamander-like ancestors across dry land. Fast forward 300 million years, and your hands had become fine-tuned for manipulations: your lemur-like ancestors used them to grab leaves and open up fruits. Within the past few million years, your hominin ancestors had fairly human hands, which they used to fashion tools for digging up tubers, butchering carcasses, and laying the groundwork for our global dominance today. 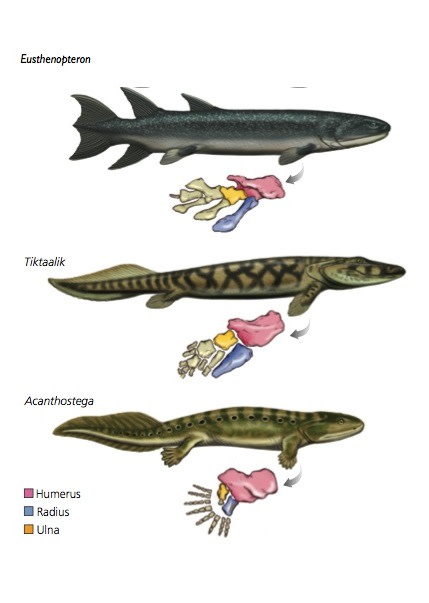 We know a fair amount about the transition from fins to hands thanks to the moderately mad obsession of paleontologists, who venture to inhospitable places around the Arctic where the best fossils from that period of our evolution are buried. (I wrote about some of those discoveries in my first book,

At the Water's Edge.

) By comparing those fossils, scientists can work out the order in which the fish body was transformed into the kind seen in amphibians, reptiles, birds, and mammals--collectively known as tetrapods. Of course, all that those fossils can preserve are the bones of those early tetrapods. Those bones were built by genes, which do not fossilize. Ultimately the origin of our hands is a story of how those fin-building genes changed, but that's a story that requires more evidence than fossils to tell. A team of Spanish scientists has provided us with a glimpse of that story. They've tinkered with the genes of fish, and turned their fins into proto-limbs. Before getting into the details of the new experiment, leap back with me 450 million years ago. That's about the time that our early vertebrate ancestors--lamprey-like jawless fishes--evolved the first fins. By about 400 million years ago, those fins had become bony. The fins of bony fishes alive today--like salmon or goldfish--are still built according to the same basic recipe. They're made up mostly of a stiff flap of fin rays. At the base of the fin, they contain a nubbin of bone of the sort that makes up our entire arm skeleton (known as endochondral bone). Fishes use muscles attached to the endochondral bone to maneuver their fins as they swim. Our own fishy ancestors gradually modified this sort of fin over millions of years. The endochondral bone expanded, and the fin rays shrank back, creating a new structure known as a lobe fin. There are only two kinds of lobe fin fishes left alive today: lungfishes and coelacanths. After our ancestors split off from theirs, our fins became even more limb like. The front fins evolved bones that corresponded in shape and position to our ulna and humerus. A 375-million-year-old fossil discovered in 2006, called Tiktaalik, had these long bones, with smaller bones at the end that correspond to our wrist. But it still had fin rays forming fringe at the edges of its lobe fin. By 360 million years ago, however, true tetrapods had evolved: the fin rays were gone from their lobe fins, and they had true digits. (The figure I'm using here comes from my more recent book, The Tangled Bank.) Both fins and hands get their start in embryos. As a fish embryo grows, it develops bumps on its sides. The cells inside the bumps grow rapidly, and a network of genes switches on. They not only determine the shape that the bump grows into, but also lay down a pattern for the bones which will later form. Scientists have found that many of the same genes switch on in the limb buds of tetrapod embryos. They've compared the genes in tetrapod and fish embryos to figure out how changes to the gene network turned one kind of anatomy into the other. One of the most intriguing differences involves a gene known as 5'Hoxd. In the developing fish fin, it produces proteins along the outer crest early on in its development. The proteins made from the gene then grab other genes and switch them on. They switch on still other genes, unleashing a cascade of biochemistry. Back when you were an embryo, 5'Hoxd also switched on early in the development of your limbs. It then shut off, as it does in fish. But then, a few days later, it made an encore performance. It switched back on along the crest of the limb bud a second time. This second wave of 5'Hoxd marked a new pattern in your limb: it set down the places where your hand bones would develop. Here, some scientists proposed, might be an important clue to how the hand evolved. It was possible that mutations in our ancestors caused 5'Hoxd to turn back on again late in development. As a result, it might have added new structures at the end of its fins. If this were true, it would mean that some of the genetic wherewithal to build a primitive hand was already present in our fishy ancestors. All that was required was to assign some genes to new times or places during development. Perhaps, some scientists speculated, fishes today might still carry that hidden potential. Recently Renata Freitas of Universidad Pablo de Olavide in Spain and her colleagues set out to try to unlock that potential. They engineered zebrafish with an altered version of the 5'Hoxd gene, which they could switch on whenever they wanted by dousing a zebrafish embryo with a hormone. The scientists waited for the fishes to start developing their normal fin. The fishes expressed 5'Hoxd at the normal, early phase. The scientists waited for the gene to go quiet again, as the fins continued to swell. And then they spritzed the zebrafish with the hormone. The 5'Hoxd gene switched on again, and started making its proteins once more. The effect was dramatic. The zebrafish's fin rays became stunted, and the end of its fin swelled with cells that would eventually become endochondral bone. These two figures illustrate this transformation. The top figure here looks down at the back of the fish. The normal zebrafish is to the left, and the engineered one is to the right. The bottom figure provides a close-up view of a fin. The blue ovals are endochondral bone, and the red ones display a marker that means they're growing quickly.

One of the most interesting results of this experiment is that this single tweak--a late boost of 5'Hoxd--produces two major effects at once. It simultaneously shrinks the outer area of the fin where fin rays develop and expands the region where endochondral bone grows. In the evolution of the hand, these two changes might have occurred at the same time. It would be wrong to say that Freitas and her colleagues have reproduced the evolution of the hand with this experiment. We did not evolve from zebrafishes. They are our cousins, descending from a common ancestor that lived 400 million years ago. Ever since that split, they've undergone plenty of evolution, adapting to their own environment. As a result, a late boost of 5'Hoxd was toxic for the fishes. It interfered with other proteins in the embryos, and they died. Instead, this experiment provides a clue and a surprise. It provides some strong evidence for one of the mutations that turned fins into tetrapod limbs. And it also offers a surprise: after 400 million years, our zebrafish cousins still carry some of the genetic circuits we use to build our hands. References: Freitas et al, "Hoxd13 Contribution to the Evolution of Vertebrate Appendages." Developmental Celldx.doi.org/10.1016/j.devcel.2012.10.015 Schneider and Shubin, "Making Limbs from Fins." Developmental Celldx.doi.org/10.1016/j.devcel.2012.11.011