Triassic Park: A Decade-Long Labor To Recreate A Lost World 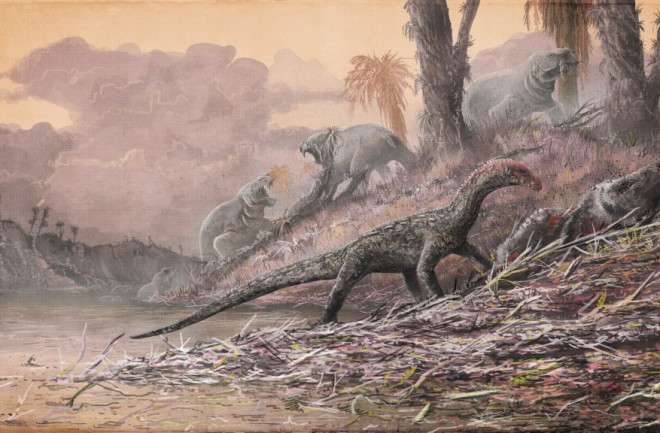 Researchers spent a decade working at remote African sites to fill in serious gaps in our understanding of life at the Dawn of the Dinosaur Age. The scene, including dino-relative Teleocrater in foreground, illustrates what mid-Triassic Tanzania might have looked like 240 million years ago. (Credit Mark Witton/Natural History Museum, London)

You've probably heard about The Great Dying, more formally known as the End-Permian mass extinction, when more than 95 percent of species worldwide went extinct. This darkest hour in the story of life on Earth occurred some 251 million years ago, most likely the result of monstrous, region-wide volcanic activity in Siberia that acidified the oceans, wrecked the climate and may have even ripped open the ozone layer to allow in rather nasty levels of ultraviolet radiation.

Life got knocked down, but it got up again. (Apologies if you now have an earworm stuck in your head. Actually, no. I'm not sorry at all.)

Surviving species recovered and even thrived. In time, biodiversity exploded. New ecological hierarchies formed and expanded. While there were obvious losers at the end of the Permian Period, there were also clear winners emerging in the Triassic that followed — including two upstart lineages that would eventually make quite a name for themselves: dinosaurs and mammals.

Unfortunately, much of what we know about the Triassic and the Great Recovery, as it might be called, comes from a small number of locations.

In the Southern Hemisphere, the Karoo Basin of South Africa has been the primary site for telling the story spanning the Permian and Triassic. Although fossil finds from the Karoo have been numerous and significant, they reveal only a narrow geographic slice of what was happening during this critical period of loss and recovery.

Thanks to a decade-long project, however, researchers are finally able to lay the foundations for a new understanding, a regional picture of what life was like in the Triassic in the Southern Hemisphere beyond the Karoo.

Published today by the Society of Vertebrate Paleontology as part of their memoir series, the team, led by University of Washington paleontologist Christian Sidor, offers 13 different studies — adding to the 24 papers already published during the project — that help to recreate the Triassic World in better detail than ever before.

Project members digging up a whole new world in Tanzania in 2015 as part of a decade-long effort to understand the period following the End-Permian mass extinction 251 million years ago. (Credit Christian Sidor/University of Washington)

Although the memoir is not available online (not even the abstracts...sorry, friends, I asked!), a summary of the information provided in the publication's introduction gives a sense of the scope of their efforts. Some of the highlights:

Maybe you started reading this post thinking I was going to detail a ton of new species, or give you an exact description of what, say, climate was like in the Triassic. Nope. I was able to get my hands only on the introduction to the baker's dozen papers published today, and again, none of them have open-access links.

The truth is, even though many of the details in today's publication are not readily accessible to everyone, the mere existence of the project, and its success, is what should be celebrated.

Since the earliest days of paleontology in the 19th century, much of the focus, and the hypotheses formed, centered around the Northern Hemisphere. Europe and North America (and more recently China) drew the most intense interest. Fossils collected from other corners of the world, particularly Africa, often were dismissed (see, for example, a recent second look at some fossils from the Karoo).

In the 21st century, however, paleontology is branching out both in the geographic regions explored and the people exploring them. That's why we're learning about pterosaurs from Morocco, and why young women in Egypt are uncovering new species while helping to build rigorous, locally-based paleontology programs.

The researchers behind today's pile of studies plan to continue their work in Tanzania and Zambia, and more teams than ever before are working in Africa in general, as well as South America. Personally, I think that's terrific. Rigorous expanded research can only lead to new understanding, and that's a good thing. It's how paleontology, like any other field of science, advances.

Before the Triassic period, before dinosaurs, before even the Great Dying that was the End-Permian mass extinction, gorgonopsids ruled the day, at least on land. Then the Permian ended and so did they. They couldn't adapt to the new world around them. Don't be a gorgonopsid. (Gorgonopsid skull collected by members of the Tanzania-Zambia Project in Zambia in 2009.) (Credit Christian Sidor/University of Washington)

Before the Triassic period, before dinosaurs, before even the Great Dying that was the End-Permian mass extinction, gorgonopsids ruled the day, at least on land. Then the Permian ended and so did they. They couldn't adapt to the new world around them. Don't be a gorgonopsid. (Gorgonopsid skull collected by members of the Tanzania-Zambia Project in Zambia in 2009.) (Credit Christian Sidor/University of Washington)