Trees of Life: Choose Your Diversity

I am hanging out at the airport, having just missed my flight to Raleigh, but free wireless makes it just an extra office. I've just read a few complaints on my post about visualizing the tree of life. Some commenters are not pleased that the tree I illustrated the post with does a grave disservice to the overwhelming diversity of the bacterial world. It is certainly true that bacteria (and archaea) are staggeringly diverse. In a spoonful of soil there may be 10,000 species of microbes. By comparison, there are only about 5,000 mammal species. A lot of the diversity in microbes is ancient, since they've been around a lot longer than mammals, or even animals. That being said, it's important to bear in mind that there is no tree that includes all 1.8 million known species on the tree of life. Or even one percent of the branches. The biggest tree out there that I know of has 13,533 branches, and it's just a tree showing how plants are related to each other. It's likely that there are five or ten times more species waiting to be discovered. The mostly unknown diversity of microbes may kick that figure even higher. So the best we have to settle for right now are stick figure drawings. The illustration I used was produced a few years ago by David Hillis at the University of Texas and his colleagues. Of all the evolutionary trees that include branches from all the major groups of living things, Hillis's has the most species. (If there's a bigger one out there, just let me know.) There indeed a lot of animals, plants, and fungi on his tree, but until recently, they dominated the genetic databases that researchers use to build such trees. That's changing fast now, fortunately. For those who want things put in better perspective, the best I can offer you is a modified version of a tree I'll be showing tomorrow at my Darwin Day talk. The original tree comes from the interactive Tree of Life site. It's based on all the species whose genomes have been fully sequenced. The iTOL scientists analyze a select group of genes that show little sign of having been swapped between species. Here, all the eukaryotes (us, fungi, plants, protozoans) are in the red section of the outer circle. The blue are bacteria, the green archaea (a separate branch of microbes). There's some debate over the methods the scientists used to generate this tree, and the few hundred branches are pretty paltry. But it definitely conveys the deep diversity among the microbes, and the surprisingly small distance between you and a Portobello mushroom. 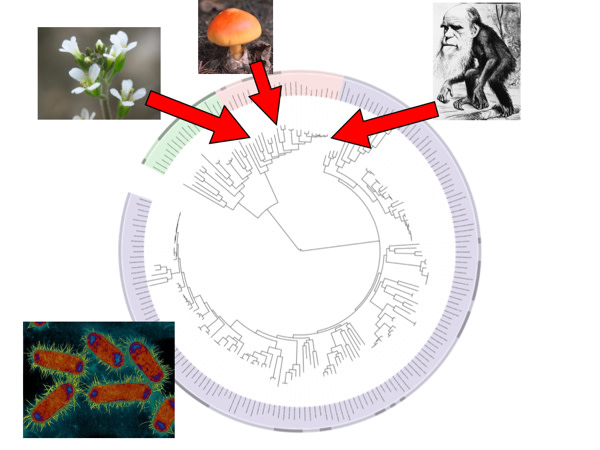