square off over a female. Fisticuffs will soon ensue and as a final challenge to each other, the males... er... vigorously shake their bums at each other. Their quivering buttocks shake the plants they sit on, sending threatening vibrations towards their rival. This secret line of communication has just been uncovered by Michael Caldwell

from Boston University. To decipher these messages, he has used a hi-tech combination of infrared cameras, saplings rigged with accelerometers and even a cybernetic Robofrog. During mating season, male red-eyed tree frogs gather in the rainforests of Panama to compete for females with dramatic multimedia performances, involving calls and visual signals. Studying these messages can be difficult because the frogs communicate at night. A white lamp would kill their natural behaviour, prompting males to become far more restrained than usual, save in the presence of females. Instead, Caldwell watched them under an infrared light. He pitted 38 pairs of frogs against each other, on plants fitted with accelerometers. 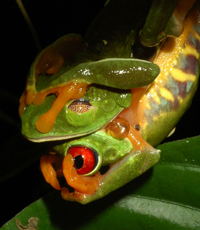 The frogs made two types of calls (chuckles and chacks), raised their bodies off their leaves and kicked out with their legs. And in every aggressive encounter, they also rapidly shook their bums, producing vibrations with a consistent high-pitched tone. The contests would last for anywhere from a minute to an hour. If the signalling didn’t work, the time was talk was over and violence ensued. Males would wrestle with each other, sometimes for hours on end (see right). The vibrations, or ‘tremulations’, were clearly very important and were usually the last line of negotiation before battle commenced. The victor almost always shook for more time, created longer-lasting vibrations and was more likely to have the last shake. The frequencies of the vibrations were fairly constant although victors tended to produce higher-pitched tremulations if they were smaller than their rivals or similarly sized. Of course, the sight of a frog shaking its bum is also quite striking, but Caldwell found that a male was no more likely to tremulate when his opponent was facing him than when he was turned away. This strongly suggests that the vibrations themselves were carrying information. In fact, every part of the male’s repertoire sends distinctive tremors through the plant, including his chuckles. Even the kicking legs seem to brush past the plant stems in the style of a musician plucking a guitar string. Caldwell’s observations had been informative but he wanted to test the frogs’ behaviour. Enter Robofrog – a model equipped with an electric shaker and a prime directive is to provoke other males. When he made his own vibrations, living males responded accordingly and aggressively. By contrast, nothing happened when he sat still, when he made visual signs without tremulating, or when Caldwell exposed the test frogs to white noise vibrations in Robofrog’s absence.

All in all, these experiments show that competing red tree frogs use a secret channel of communication that most human observers would be completely unaware of. Vibrations are an excellent way of conveying messages in the rainforest, when the combination of darkness and dense foliage might prevent the conversers from seeing each other clearly. Exactly what they say is unclear, but they could provide information about the contender’s motivation or size. And they’re undoubtedly aggressive – the tree frog’s version of smack-talk. So far, the red-eyed tree frog is the first back-boned animal that’s been clearly shown to communicate by shaking the surface it sits on. But Caldwell suspects that it’s far from the only one, especially since many other species are highly sensitive to vibrations. Tree-dwellers are probably particularly good at this, especially ones with larger bodies that can shake their supports more strongly. Candidates include the male veiled chameleon

, which shakes the branches it sits on in the presence of a female, and the female South Asian common tree frog, which seems to attract mates by tapping her toes on the plants that encircle their breeding sites. On the ground, and on a much bigger scale, elephants could also use vibrations as a sort of ‘seismic signal’

Photos and videos by Michael Caldwell More on frogs: