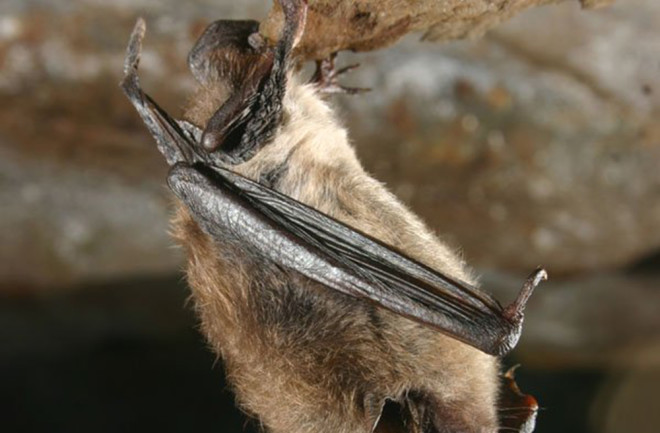 It must be a horrible way to die: A fuzzy, white mold penetrates the mouth and nose, leading to starvation and, finally, death. White nose syndrome (WNS), caused by a fungus, has killed as many as 6 million North American bats since winter 2006, sometimes wiping out whole colonies. But there’s new hope for these denizens of the dark: In May, bats treated with a compound that inhibits the fungus’s growth were released into the wild, becoming the first known WNS survivors.

Researchers treated a group of bats with a compound that inhibits the growth of the fungus and successfully released a healthy group (including the bat pictured above) back into the wild this year. | Katie Gillies/Bat Conservation International

After hibernating in refrigeratorlike chambers containing the compound, which is produced by a soil bacterium (a strain of Rhodococcus rhodochrous), diseased little brown and northern long-eared bats emerged healthy. On May 19, researchers from Georgia State University and the U.S. Forest Service released dozens of the bats near Mark Twain Cave in Missouri. Treated bats that remained in captivity fared well over the summer and fall. At the time of this writing, researchers were hopeful that the released bats would return to their winter hibernation sites in good condition.