The find that produced the Antikythera device likely has more surprises in store. 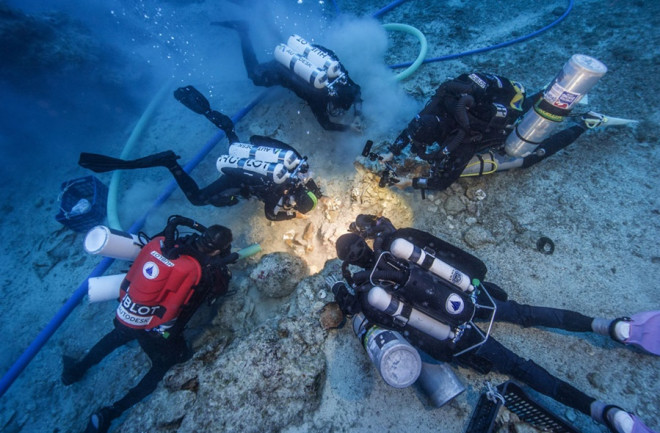 The Antikythera shipwreck has long been a fascinating site. A new excavation is still finding artifacts, including an ancient skeleton that may have preserved DNA. (Credit: Brett Seymour/EUA/WHOI/ARGO)

Off the coast of Greece, near the tiny island of Antikythera, a 2,000-year-old shipwreck continues to offer up its bounty. When the wreck was discovered 117 years ago, divers recovered life-size bronze and marble statues and a mysterious clockwork device. And last year, researchers found a partial skeleton beneath the sloping seafloor that, through DNA analysis, promises to reveal the biological details of a passenger. Other significant finds might be just a shovel away as the ambitious Return to Antikythera, the first systematic excavation of the shipwreck, continues this summer. Metal detectors show that some of the shipwreck and its artifacts remain entombed in sand, which acts like a hermetic seal to keep out the ravages of the sea. Perhaps another mechanism or collection of sculptures waits to be freed, says Brendan Foley, a marine archaeologist at Lund University in Sweden and co-director of the international project.

“Part of the excitement of this wreck,” he says, “is that the possibility of finding something stupendous is great.”

We already know a fair amount about the vessel itself. Around 65 B.C., when Rome ruled over the Mediterranean world, a Greek merchant ship set out west across the Aegean Sea. Measuring 165 feet long, a behemoth at the time, it was loaded with luxury items probably picked up at eastern Mediterranean ports, as well as livestock and scores of travelers, Foley says. Merchant vessels were the only way people could travel to many cities.

Around 65 B.C., a 165-foot-long commercial boat, illustrated above, sank near the island of Antikythera on the western side of the Sea of Crete. Its wreckage was found in 1900. (Credit: Joe McKendry)

A storm likely cut the vessel’s trip short, smashing it against the cliffs of Antikythera. The heavily loaded ship would have sunk fast. Underwater, the boat skidded down a 70-degree slope before stopping 160 feet or so below the sea’s surface, unleashing a plume of debris that might have covered some cargo instantly.

The ship would not be disturbed again until 1900, when a sponge diver clad in a clunky dry suit and brass helmet saw an unattached bronze arm from a sculpture on the seabed, says Alexander Jones, a historian of the ancient world at New York University who has studied the shipwreck and its cargo. Subsequent dives revealed relics strewn across the floor, and Greek officials orchestrated a recovery. Among the finds were 36 marble statues of heroes, gods and horses. Remnants of bronze statues, ceramics and personal belongings — like golden earrings, silver coins and jewelry — also emerged.

In 1902, fragments of what became known as the Antikythera mechanism were found while sifting through debris at the National Archaeological Museum in Athens. The discovery brought enormous public and scientific attention to the shipwreck.

Though ancient Greek writings made reference to wondrous astronomical devices, scholars had no idea the Greeks could build something as sophisticated as this mechanism. When whole, its tiny pieces fit together with unbelievable precision. Not until clock manufacturing in 14th-century Europe were interlocking gears again used in a similar manner. “We have nothing surviving from the Greco-Roman world in metalwork ... that is anywhere near so complex and refined,” Jones says.

It’s taken decades of interdisciplinary scholarship to reveal the mechanism’s secrets. While historians had mostly figured it out in the 2000s, last year the science, history and philosophy journal Almagest published the most precise details yet on what it actually does. In effect, the Greeks crammed nearly all their extensive astronomical knowledge into something the size and shape of a shoebox.

The device had faceplates on the front and back framed by a wooden case, enclosing about 60 gears, Jones says. The front plate had a circular dial with pointers tracking the movement of the sun, moon and five known planets across the sky during the calendar year. Doing this is harder than it sounds: From Earth’s perspective, the planets appear to stutter in the sky rather than freely circle. The Greeks compensated for this through ingenious engineering that periodically slowed and reversed the direction of the gears controlling the orbits.

Archaeologists have found human remains at the Antikythera shipwreck. Pictured, a skull, leg and arm bones lie on the seafloor. The site's conditions may have preserved DNA within these finds. (Credit: Brett Seymour/EUA/WHOI/ARGO)

The back faceplate was similarly impressive. It had two large dials: One showed a Greek lunar month calendar while the other showed the biennial and quadrennial cycles of athletic competitions, including the Olympics. A crank on a side of the device turned the gears to set the front and back dials in motion.

Jones and Paul Iversen, a Greek scholar at Case Western Reserve University, believe that craftsmen on the Greek island of Rhodes, in the eastern Mediterranean, likely created the device. It was probably aboard the ship for delivery to a customer in northwest Greece when the storm struck.

Most scholars agree that the mechanism was not a marine navigation device, and there is some consensus that it was not a science research tool. Its purpose may have been to educate and amaze small groups about the cosmos. A wealthy noble or philosopher might have brought it out as a curio during an evening gathering of wine and conversation. With its future secured as a museum piece, the device in a way has returned to its original function of fascinating audiences.

Though no similar mechanisms have yet been found, the Return to Antikythera project has made several discoveries since it began excavating the site in 2014. Divers have recovered treasures such as gold jewelry, two bronze spears from oversized warrior statues and a “war dolphin” — a teardrop-shaped lead weight dropped from a ship’s sails to smash the deck of hostile vessels. “It’s the only one ever found,” Foley says.

But the most promising recovery has been the partial skeleton. Last year, Foley and his international team recovered bones from an individual’s skull, torso and limbs inches beneath the seafloor. Hannes Schroeder, a DNA analyst at the Natural History Museum of Denmark in Copenhagen and the first person to examine the skeleton, says the bones look to be from a male between age 15 and 25.

Remarkably, the petrous bone, a thick area behind the ear known for its preservation of DNA, is intact. That, plus the cold water and the skeleton’s preservation by silt and sand, bodes well for collecting usable genetic material. The results from DNA analysis are expected this fall, potentially revealing geographic ancestry, inherited diseases and even finer characteristics like hair, eye and skin color.

“We see in museums statues and personal possessions from the shipwreck, but who were the people who owned this stuff?” Schroeder says. “Here, for once, we have the chance to get really close to an individual, and nothing is closer than a person’s DNA.”

Mark Barna is an associate editor at Discover.

[This story originally appeared in print as "Treasures Beneath the Ancient Sands."]