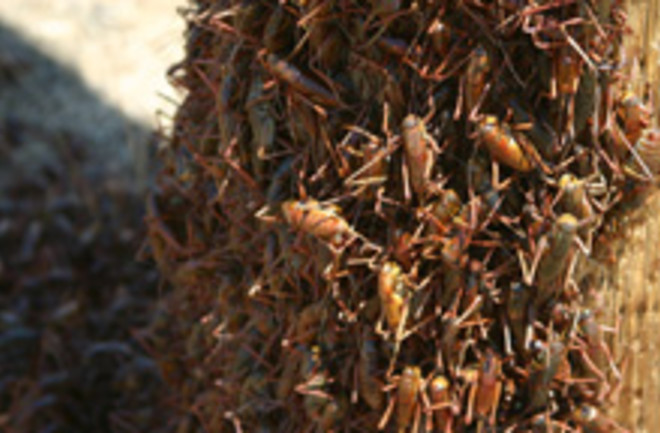 Mormon crickets have no taste in music, and Nevadans are using it against them. Residents of Tuscarora are getting ready to blast their boomboxes to ward off the crickets' semi-annual invasion, after the townsfolk realized three years ago that the pests don't like Led Zeppelin or the Rolling Stones. Mormon crickets are a real problem in northern Nevada and other parts of the Great Basin: They march in columns up to two miles long and one mile wide from about May through August. They hatch in April and invade all aspects of life before they finally lay eggs and die. They destroy crops, invade people's homes (one resident said, "You'll wake up and there'll be one sitting on your forehead, looking at you"), and clog roadways—even requiring snowplows to clear out their piled-up carcasses. People do what they can to steer the pests away, trying poison bait and other tricks. But in 2006, after reading about a woman in the 1930s who had driven the insects off with a Chinese gong, a Tuscarora resident was inspired to try out some modern music. Since she knew the crickets rested at night, she got a group together to blast music for several days from early morning 'til evening. They tuned their stereos to a hard rock station, and local reports that year said that the music stopped many of the bugs in their tracks. According to a state entomologist, "The vibrations may deter the bugs, but I don't know of any research that says yes or no." Maybe Tuscarora should petition the Stones for a reunion concert in their town. Outdoors. Related Content: The Loom: Beware of Crickets Bearing GiftsImage: Wikimedia