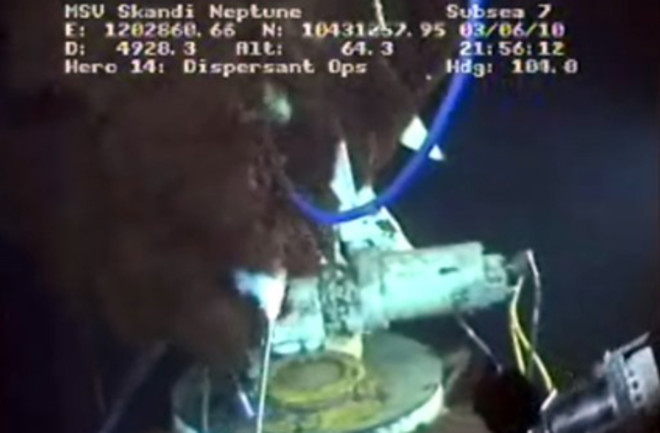 The top cap is in place. How much oil is it actually capturing, though? The Coast Guard says we won't know until later in the day, but plenty is still leaking into the Gulf of Mexico. After failing to cut through the riser with its fancy-sounding diamond-tipped saw, BP yesterday had to settle for cutting the broken riser pipes with what's been described as a big pair of shears. That method, however, likely produced a rougher cut along the edge, which would hamper the effectiveness of the containment dome BP has now placed on top of its leak.

The government's point man for the crisis, Coast Guard Adm. Thad Allen, said the cap's installation atop a severed pipe late Thursday was a positive development but it was too early to tell if will work. The funnel-like lid is designed to channel oil for pumping to a surface tanker. "Even if successful, this is only a temporary and partial fix and we must continue our aggressive response operations at the source, on the surface and along the Gulf's precious coastline," Allen said in a statement [AP].

This morning Allen offered the very rough estimate of the containment dome's effectiveness, saying it might be capturing 1,000 barrels of oil per day. If that's the right number, then it's practically nothing: The government's own estimate was increased last week to between 12,000 and 19,000 barrels per day, and BP warned that the flow would increase when it sheared off the pipe in preparation for installing the dome. According to the Christian Science Monitor

, it does appear that a jagged cut has hurt the ability to capture oil:

That seemed to be the case early Friday morning, according to the BP "spillcam," as a plume of oil and gas burst from the side of the top cap and a "dispersant ops" sub injected a kerosene dispersant into the plume via a long rod [Christian Science Monitor].

Back on shore, people are getting desperate. Oil has been found on about 100 miles of U.S. shoreline along the Gulf already, with more to come. In Louisiana, the government has entered "try anything" mode: Governor Bobby Jindal is going ahead with a plan to dredge massive amounts of sand to build 6-feet-tall sand berms that, in theory, could protect about 100 miles of Louisiana shores from the incoming oil.

The project would require dredging an estimated^ 68 million cubic meters of sand and cost at least $350 million—perhaps^ three times that figure. "I was stunned," says Joseph Kelley,^ a coastal geophysicist at the University of Maine, Orono. "This^ is a big proposal and not well thought out" [ScienceNOW].

Nevertheless, the feds have now given the thumbs-up for Louisiana to build about half the proposed amount. Says Allen:

"There are a lot of doubts whether this is a^ valid oil spill–response technique. But we're not averse to attempting this as a prototype" [ScienceNOW].

With BP's plans ending consistently in failure, it's time to consider all ideas on the table. For this one, though, many scientists are relieved that it will be half-sized, at least to start out with. Beyond the question of whether it will even work—given the timetable to build it and the likelihood of storms destroying it, it might not—there's also the chance that it will harm the Louisiana wetlands even more than doing nothing. If sand is gathered from the marshes and then thrown asunder by storms, the area might lack the sand resource it needs to recover. Previous posts on the BP oil spill: 80beats: Oil Spill Update: Saw Gets Stuck; Will Oil Still Be Leaking at Christmas?

80beats: With “Top Kill” a Failure, BP Goes Back to the Containment Dome Plan