Keep your eye out for these five carnivorous plants. 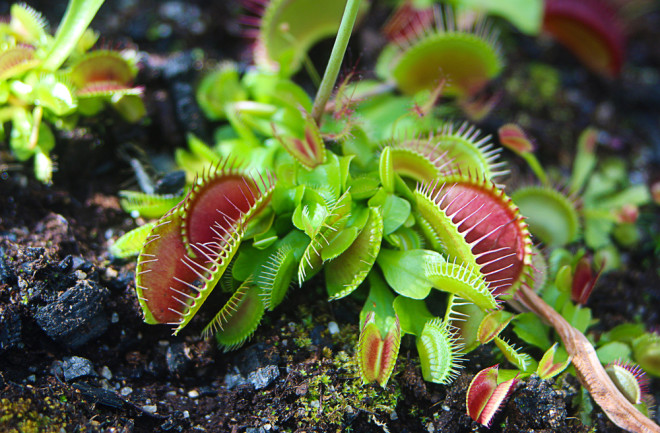 The fastest carnivorous plant in the world, the bladderwort is found throughout the United States. The plant has small, hollow structures (the bladders) – no bigger than a pinhead – that live under water and have a flexible valve. Bladderwort can trap its prey with astounding speed; its trapping mechanism is so quick that it has rarely been observed by scientists. The plant waits for its prey — which primarily consists of tiny crustaceans, recently hatched tadpoles, and mosquito larvae — to trigger the hairs on the trapdoor. The trap then closes and the bladder opens and pulls in the prey with 600 times the force of gravity. The plant is found in lakes, wet marshes certain ponds, and rivers/streams. They live in up to six feet of water, with slim stalks supporting tiny yellow flowers.

Found only in California and Oregon, the cobra lily is a member of the pitcher plant family, all of which are carnivorous. Their name comes from their leaves, which resemble a cobra that’s ready to strike. These plants are predatory, and attract insects with their sugary nectar. As the insects continue to eat the nectar, they’re led to the pitcher trap. Once inside, it’s very difficult to escape. Confusion follows when the insects are disoriented by the plants’ transparent window. Once the insects become exhausted, they soon drown at the bottom of the pitcher. Bacteria and larvae live in the cobra lily’s fluid, which aids the plant in digesting their prey. As they do, the plant absorbs nutrients. Check out this video of the cobra lily, considered an unusual hunter of the plant world.

Sundews are the biggest group of the carnivore plant kingdom. With approximately 130 species, these unusual-looking plants can be as small as a coin or grow to be the size of a small bush. Their protruding tentacles have sticky glands at their tips, which look like dew droplets — explaining their name. Sundews’ glands produce a variety of substances to attract, trap and digest insects. Once an insect is trapped in its adhesive, the sundew will coil its tentacles around the insect and smother it. Mosquitos account for a large part of their nutrition. It takes these plants about 15 minutes to kill an insect once it’s trapped, but it will take up to a few weeks for the plant to complete digestion. The assassin bug can be found living on the sundew plant with hopes of catching an insect in the vicinity. They’re an anomaly, in that they can live safely on the sundew because the plant’s secretions are harmless to it.

Found in the coastal plains and sandhills of the Carolinas, the Venus flytrap is the most well-known carnivores plant. A perennial plant that blooms each year, their flowers are pollinated by sweat bees, the notch-tipped flower longhorn beetle, and the checkered beetle. Interestingly, the Venus flytrap doesn’t trap the insects that pollinate them, but they do trap ants, spiders, grasshoppers, and beetles (different from the ones that pollinate them) within their two hinged lobes. On the inner surfaces of the lobes are hair-like projections called trichomes that cause the lobes to snap shut when prey comes in contact with them. Interestingly, less than 5 percent of their prey is made up of flying insects. The traps on the plant can perform their function several times before dying and falling off. Then, a new trap is formed in underground stems to take the old one’s place. It’s believed that the Venus flytrap can live up to 20 years, potentially longer — although this hasn’t been established for sure.