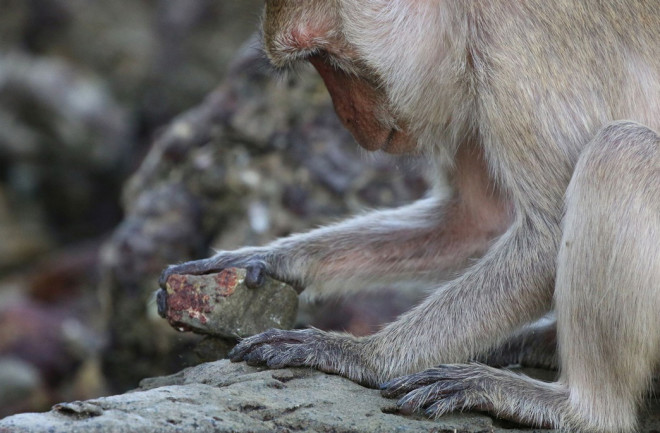 A macaque using a stone tool to break open shellfish. (Credit: Luncz et. al/eLife) The advent of tools was a big deal for humanity. It made it far easier to manipulate our environment and mold the planet to serve our own interests—from the folsom point to the iPhone X. Some animals use tools too, like the macaques of Thailand, who have figured out that their favorite shellfish snacks are much easier to eat if they bash them open with rocks first. They've become proficient shellfish smashers, so much so that the macaques are actually threatening the existence of oysters and snails an a small island there. It's a tale of technology gone wrong — only this time, humans aren't the villains.

Researchers from Thailand, Europe and Australia looked at two groups of long-tailed macaques on separate islands off the Thai coast. The two locations, both alike in shellfish populations, differed only in the number of macaques there. Koram is host to around 80 primates, while NomSao has but nine. Both groups have figured out how to use rocks to break open shellfish armor, behavior that has been observed among other groups of macaques in Thailand. On Koram, though, the abundance of tool-wielding macaques has led to a crisis of sorts. In a paper published last week in the journal eLife, the researchers estimate that a single individual on the island slurps down 47 shellfish a day, mostly oysters. For the mere 26 macaques that the researchers studied, that works out to 441,000 a year. Looking at periwinkles, a small sea snail, the researchers estimated that the monkeys could eat the entire island's population in just a year. On NomSao, the much smaller group eats only about an eighth of the available periwinkle population.

A comparison of shells from the two islands. (Credit: Luncz et. al/eLife) The effect of the feeding frenzy has significantly diminished the size of shellfish on Koram. Because the macaques seem to go for the biggest, meatiest individuals, they've begun to eradicate the mature shellfish, leaving mostly smaller juveniles in their place. Smaller shellfish mean that daintier rocks are required to break them open, and the researchers noticed that the tools of choice on Koram were markedly undersized compared to NomSao.

If the trend continues, the shellfish will eventually get so small that the macaques won't even be able to use stones to break them open anymore, making their tool-using prowess pointless. If that happens, the knowledge of stone tools could disappear from their group memory altogether, a kind of dis-evolution. The presence of tools might be no more than a passing fad, a high-water mark, perhaps, of modern macaque society. Of course, it probably won't get that bad. The macaques do have one thing going for them: many shellfish get washed to the island on currents during their planktonic stage, providing a fresh supply of meals for the hungry macaques. The situation does bear painful similarities to our own current state of affairs, though, as we expend natural resources to power our future. Perhaps the macaques have something to teach us about greed.