The complex cells that make up plants and animals only survive today because their ancestors formed partnerships with bacteria. In a previous post, I wrote about a microbe called Hatena, which provides us with a snapshot of what the early stages of this alliance might have looked like. Hatena swallows an alga which becomes an integrated part of its body. 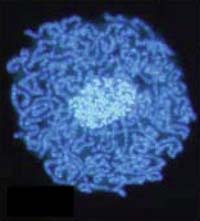 Millions of years ago, the ancestors of complex cells did the same thing, taking in bacteria and merging with them to form a single creature. Today, these integrated bacteria are mitochondria, which provide us with energy, and chloroplasts, which allow plants to photosynthesise. Hatena and its algal partner show us what the early steps in this vital alliance might have looked like. Now, another species of bacteria, Carsonella ruddii, embodies a later stage - the transfer of genes.

Typically, the lodging cell would shunt some of its genetic material over to its host. It has permanent room and board and can afford to rid itself of excess genetic baggage that was once necessary for its free-living existence.That's exactly what Carsonella has done, but it has taken this process to an extreme. It has transferred so many of its genes that it now has the smallest genome of any bacterium and it cannot possibly survive outside of its host.

Carsonella lives in the bodies of sap-sucking insects and provides them with nutrients lacking in their diet. Atsushi Nakabachi and co-workers from the RIKEN Institute in Japan found that Carsonella is minute, packing its entire complement of genes into just 160,000 base pairs (for comparison, humans have about 3 billion).

Too small to survive alone

Previously, scientists had assumed that bacteria need genomes of at least 400,000 base pairs to survive. Any less, and they wouldn't be able to carry out even the most basic of biological functions and indeed, Carsonella cannot. Many of the genes that are essential to normal bacteria have vanished from its genome.

Of the remaining few, half are devoted to the most basic of all cellular processes - dealing with amino acids, and building them into proteins. Plant sap is poor in some essential amino acids, so most likely, these genes are still there to serve the host insect, not the bacterium itself.

Not only has Carsonella pared its genes down to the bare essentials, it has also arranged with remarkable efficiency. Nine in ten of its genes overlap with each other, and they cover 97% of its genome. In contrast, humans are much more lackadaisical with our packaging and about 98% of our genomes is made up of so-called 'junk DNA'.

The result of this genetic streamlining is an organism that is completely incapable of living on its own. Carsonella is well down the evolutionary path towards becoming an essential part of its host cell, completey devoid of independence. It provides strong support for the idea that modern mitochondria and chloroplasts evolved in the same way.

These essential components of today's cells have their own massively reduced genomes, and most of the genes they need are stored and deployed by the host. While they have abandoned their independence, they are just as essential for their host as their hosts are to them.