To win at rock-paper-scissors, put on a blindfold 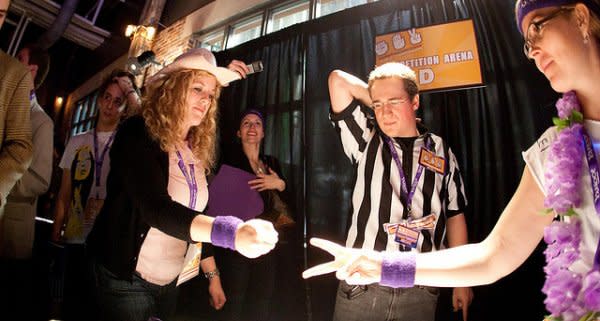 In 2007, one Jamie Langridge became $50,000 richer after winning intense national tournament in Las Vegas. Langridge beat his opponent decisively, with a classic open-hand technique. The sport? Rock-paper-scissors. Rock-paper-scissors seems deceptively simple. Pairs of opponents display one of three hand gestures. Paper covers rock, rock blunts scissors, and scissors cut paper. It’s so straightforward that children the world over learn to play it. But this is not just a game of chance. Played at the highest level, it becomes a game of psychological strategy, one that justifies five-figure trophies in large competitions and even the publication of strategy guides. Such advanced games are possible because people don’t choose their hand shapes randomly. They are affected by moves that have gone before, and what other people are doing. Consider a new experiment by Richard Cook at University College London. Cook asked 45 people to face off against each other in several rounds of rock-paper-scissors, in exchange for real money. In every game, either one or both players were blindfolded. Cook found that the players drew with each other more often when one of them could see (36.3% of the matches) than when both were blindfolded (33.3% of them). The latter figure was exactly the proportion of draws you’d expect if the players were choosing randomly; the former was significantly higher than chance. Cook devised this study because he was interested in the idea that we all automatically and unconsciously imitate one another. There’s plenty of evidence that we do indeed copy one another, from obvious gestures like touching our face to subtle movements like tensing our muscles. But it’s not clear whether these actions are truly involuntary in the way that the knee-jerk reflex is. To find out, Cook wanted to see if people can stop themselves from performing these acts of mimicry. That’s why he turned to rock-paper-scissors. Here is a game where you have to avoid imitating your opponent in order to win – the rules implicitly encourage people to avoid copying what their adversaries do. The results of Cook’s face-offs suggest that the sighted player has a slight tendency to imitate the blindfolded one – that’s why a blindfolded player will draw more often against a sighted one than another blindfolded opponent. And indeed, players were particularly likely to imitate rocks and scissors. The sighted players weren’t using any obvious strategies. Their gestures weren’t related to the ones their opponents made in the previous round, or the one before that. Instead, Cook thinks that they were acting involuntarily. The timing of their moves supports his conclusion. There simply isn’t enough time to see what the other player does and make a conscious decision to ape it. If the players were doing that, there would have been a noticeable delay, and an overseeing referee would have notified the researchers. There was, however, enough time for the brain to process signals from the eyes, and send instructions to the arm without any conscious thought. It takes at least 200 milliseconds to do this, and in his experiments, Cook saw that the sighted players made their move more than 200 milliseconds after their opponent on around half of the games. Cook invokes the idea of mirror neurons, which fire both when animals act and when they see others performing the same actions. According to this interpretation, the sight of someone else’s falling hand would trigger neurons that encode the same movement in our brains, nudging us towards doing the same thing. The existence of mirror neurons in the human brain is controversial (they’re only formally been identified in monkeys), but Cook notes that playing rock-paper-scissors lights up parts of the brain where human mirror neurons are supposed to lie. Of course, Cook says, “The tendency to imitate need not be overwhelming.” People can overcome it if they have enough concentration, motivation or experience, which is presumably why folks like Jamie Langridge can walk away with big tournament prizes. Now, what happens when people play rock-paper-scissors-lizard-Spock? Some novice-level tips for rock-paper-scissors: