Now that we know some dinosaurs had down or feathers instead of the scales we used to imagine, there are intriguing new questions to be answered. Did forest-dwelling species use patterned feathers for camouflage? Did other dinosaurs use flashy colors for communication or courtship, like modern birds do? Using new imaging techniques, scientists are beginning to color in their dinosaur outlines.

In previous studies, researchers have scoured fossils of dinosaurs and early birds for melanosomes, structures in cells that hold the pigment melanin. (Despite the range of colors in our eyes, fur, and skin, most animals only produce one pigment: the brownish melanin. Blues and greens can be created by light-scattering tricks.) The shape of a melanosome can tell researchers what type of color it was responsible for, from black to yellow to red. But melanosomes, like other non-bony structures, break down over time and are hard to find in fossil form.

Instead of searching for the cellular packages that held pigments, Roy Wogelius and other scientists at the University of Manchester decided to search for traces of metals. Elements such as copper, zinc, and calcium bind to melanin while an animal is alive. Though the melanin decays over time, the metals remain behind.

The researchers used a new imaging technique that's sensitive enough to find and map trace distributions of elements. They first scanned samples from non-extinct species, including a fish eye, bird feathers, and a squid. The distribution of copper turned out to correspond with the most pigmented areas in the animals--the squid's ink sac, for example, was highly coppery.

Then Wogelius and his colleagues turned their scanners to fossils, including Confuciusornis sanctus, an early bird that lived with the dinosaurs. (Confuciusornis was discovered in China and named after who you'd think.) The researchers created a map of copper distribution in the fossil, which you can see below. Copper is shown in red. 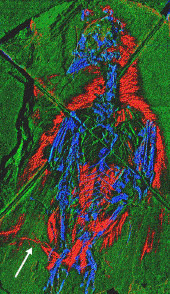 Based on their map, they could then sketch a shaded-in Confuciusornis.

This technique doesn't yet tell us what colors Confuciusornis wore, only where its darkest feathers were. Those areas could have been black or brown or red--or the bird could have colored its feathers through its diet, as a goldfinch or a cardinal does today. Since that kind of coloration doesn't involve melanin, it would be invisible to these scans. But as technology improves and becomes more sensitive to the microscopic tidbits of information hidden in fossils, we may be able to find out what dinosaurs really looked like. We might be able to discard the green and brown lizards plodding through today's books, like the sepia-toned photographs of the past, with something much more lifelike.