To Tell an Englishman From an Irishman, Look at Their Genes 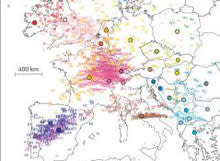 By examining half a million tiny differences in the genomes of Europeans, researchers can determine with surprising accuracy where on the continent each person comes from, easily distinguishing the Irish from the English, for example. Two new studies

reveal that our DNA contains a sort of global positioning system, which researchers can use to pinpoint where in the world both we and our relatives came from [ScienceNOW Daily News].

The findings surprised geneticists by showing that despite centuries of immigration and intermarriage throughout Europe,

genetic differences between Europeans are almost entirely related to where they were born. This, however, does not mean that the citizens of each European nation represent miniature races. "The genetic diversity in Europe is very low. There isn't really much," says Manfred Kayser [New Scientist],

author of one of the studies. To conduct the study, the two teams of researchers each analyzed hundreds of thousands of common gene variants called single nucleotide polymorphisms (SNPs) across the genomes of people from about two dozen countries. SNPs are places in the genome where one person's DNA might read A, while another's T

. For each test subject, the researchers inspected half a million of these SNPs. The results showed genetically similar clusters of people that closely aligned with Europe's geographical and political boundaries. These results, published in Current Biology and Nature [subscriptions required], might seem to imply that

some difference in national character is showing up at the DNA level. But this is not the case, [author John] Novembre said. The differences emerging from his gene chips are mostly neutral variation, meaning changes to which natural selection is indifferent because they do not affect survival. Such changes are probably too inconsequential to affect any properties that people are likely to notice [The New York Times].