To Scare Off Predators, These Lizards Stick Their Tongues Out 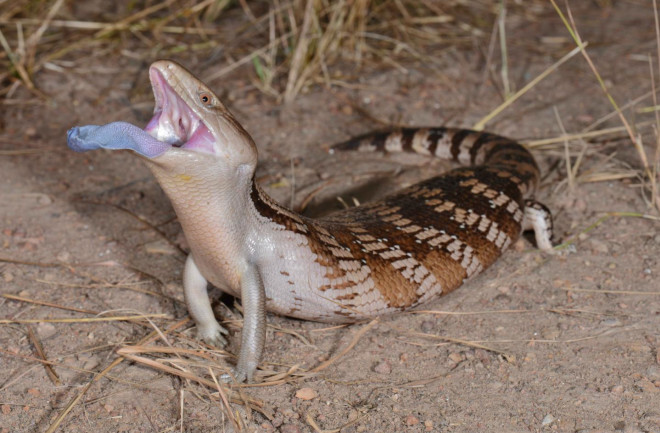 A bluetongue skink in a classic anti-predator display. (Credit: Shane Black) When most animals feel threatened, their responses can be divided into two general categories: fight or flight. Bluetongue skinks, though, buck the trend in a most unusual way — when attacked, they stick their tongues out. Their tongues are bright blue, and the sudden flash of color can be just enough to give potential predators pause and allow the lizards to escape. Now researchers find these tongues don’t just shine in wavelengths visible to humans — they’re also brightly ultraviolet, a new study finds. Bluetongue skinks are relatively large (in lizard terms), though short-legged, reptiles widely found throughout Australia, eastern Indonesia and Papua New Guinea. They are generally brown, sometimes with dark bands, coloration that helps camouflage them from predators. Their dun color scheme also serves to make their colorful tongues all the more conspicuous.

To learn more about why these lizards possessed such tongues, scientists investigated the largest of these species, the northern bluetongue skink (Tiliqua scincoides intermedia), an omnivorous, ground-dwelling lizard in northern Australia. "The 'bluey' is something of a national icon in Australia, like the lizard version of the kangaroo," said study senior author Martin Whiting, a behavioral ecologist at Macquarie University in Sydney. "Lots of people have seen them in their backyards and keep them as pets." The scientists analyzed the color of different parts of the tongues of 13 skinks. "Measuring tongue color is a little difficult — we've got to encourage the lizard to open its mouth, and then we use a piece of wood with some padding on it to keep the lizard's mouth open while we restrain its head," Whiting said. "We then quickly measure the tongue's color as the bluey tries to bite the equipment, and the tongue is wet and quite mobile, so it took a bit of practice to get the measurements right." They discovered the skinks’ tongues are not only blue, but also reflect ultraviolet light. The reptile's main predators — birds, snakes and monitor lizards — are all thought to see ultraviolet light, the researchers said. In experiments, Whiting and his colleagues simulated attacks on these lizards by pushing models of predators at them, such as a frozen snake, a stuffed bird, a mounted monitor lizard and a stuffed fox. The skinks would remain camouflaged until the very last moment before quickly revealing their tongues, in concert with aggressive defensive behaviors that amplified the displays, such as hissing or inflating their bodies. The researchers suggested the skinks restrict showing off their full tongues until the final stages of an attack when the lizards are most at risk. The sudden startling display of the tongues can then make an incoming predator reflexively recoil, prompting it to slow or even stop its assault.

This dramatic behavior "meets the predictions of what we call a deimatic display, which are anti-predator displays that there are not many examples of, and which are quite poorly understood — the theory behind these displays has only been properly developed in the last couple of years," Whiting said. "A deimatic display is designed to basically overload the sensory system of a predator," Whiting said. "For example, if I walked up behind you and clapped my hands really loudly behind your head, you might be momentarily stunned and possibly a little disoriented, potentially giving an animal enough time to make its getaway. You find deimatic displays in animals such as mountain katydids, which lift their wings and display spectacular colors on their abdomens when predators approach." There are specific qualities that suggest a display is deimatic, Whiting said. "If it's a visual display, you would predict it'd involve a transition from an inconspicuous state to a highly conspicuous state, and something flashed at a predator as a surprise at the last second," he said. "If the display is too early, it might not work — it's most effective when it's in their faces, just as clapping my hands behind your head is more effective than doing so 10 meters away." The scientists noted the timing of this last line of defense is crucial. If carried out too early, the conspicuous display may break the lizard's camouflage and draw unwanted attention from predators. If performed too late, the reptile may become a carnivore's latest snack. The researchers found the rear of the skink's tongue was nearly twice as brightly blue and ultraviolet as the tip. "Lizards tend to flick their tongues when they move around their environments, which can help them detect food patches, or whether predators or other members of their species have walked through their territory, but they wouldn't want to be too conspicuous while doing so," Whiting said. "The way they've solved that problem is to keep the really conspicuous parts of their tongues in the back of the tongue, not the front of the tongue, so they can flick their tongues and not be spotted by predators, and when they need to, they can put on a display." In the future, Whiting and his colleagues want to see how effective a bluetongue skink's display is by testing common predators of the reptile with a robotic version of the lizard. "We can use tongues that are UV-reflective, and we can also make a pink tongue and a highly camouflaged tongue, and we can present the robotic bluey to something like a kookaburra, which eats young bluetongue skinks, and when the bird comes in to attack the robot, we can remotely open the robot's mouth and see the effect," Whiting said. The scientists detailed their findings online June 7 in the journal Behavioral Ecology and Sociobiology.