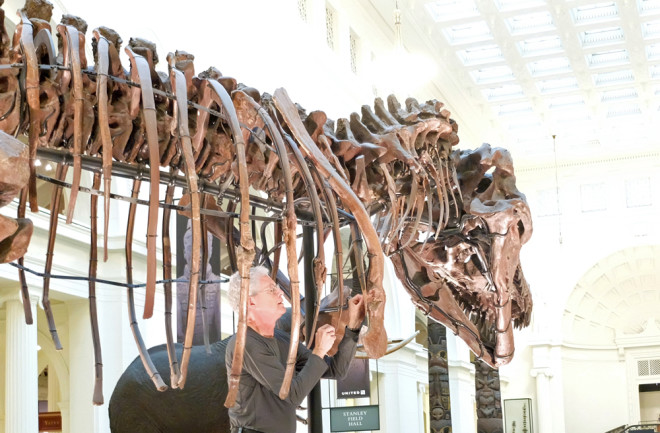 Bill Simpson, Collections Manager of Fossil Vertebrates, carefully disassembles Sue's arms during a public event Friday. (Credit: Hannah Gavin) Sue, the iconic Tyrannosaurus rex fossil housed at Chicago’s Field Museum, measures 13 feet tall from the ground to the top of her hip — a grown man balancing on another man’s shoulders, arms fully outstretched, would barely reach the top. But in terms of reach, an average human arm just about matches the length of Sue’s. Relative to her colossal body, that makes Sue’s arms small – puzzlingly small. So small that the dinosaur couldn’t scratch her own face, says Bill Simpson, a collections manager at Chicago’s Field Museum. If not chin scratching, what purpose did the disproportionately small forelimbs serve? This remains one of the biggest mysteries in T. rex studies to date. In an attempt to solve it, scientists disarmed the remains of the most ferocious creature to walk the earth.

Today, Simpson can only offer speculative theories about those tiny arms. Perhaps they were used for grasping prey when hunting or eating. Maybe they helped push the terrible lizard up from the ground following a tumble. On the other hand, they may have been useful in romantic encounters.

The arm that could answer a nagging paleontological question: What purpose did this thing serve? (Credit: Hannah Gavin) “You know, when you can’t explain something, often sex comes to mind!” says Simpson, chuckling, as he refers to a theory that the arms were used in dinosaur copulation. But each theory, Simpson admits, is a loose hypothesis – what scientists sometimes call a “hand waving” explanation. Without new data, scientists will remain stuck, waving their T. rex-sized arms. Luckily, as the largest and most complete T. rex fossil ever discovered, Sue is perfectly equipped to lend a hand – quite literally – to Chicago-based researchers collecting paleontological data to support or disprove any of the above theories.

The Time Is Now

The information scientists are after lies in Sue’s bone structure. Bones, like other body parts, are made of cells. The arrangement of bone cells can tell an informed onlooker much about the ‘life’ of the bone. For example, a bone that had to heal after a break will exhibit a scar, much like skin that has recovered from a bad cut. Even bones that have not experienced major trauma contain cellular-level evidence of stresses and usage. In other words, the arrangement of Sue’s bone cells can tell scientists about the types of activities the arm was used for. Sue was discovered by her namesake, Sue Hendrickson, in 1990. Given the intrigue surrounding T. rex arms, it’s a wonder it took nearly three decades for researchers to take a closer look at Sue’s forelimbs. But it wasn’t possible to safely examine Sue’s bones at a cellular-level until now. Historically, cellular analyses require paper-thin slices of bone that are examined by microscopy. Herein lies the problem: There is, understandably, a significant lack of enthusiasm for slicing and dicing the best-preserved T. rex specimen on the planet. Enter: Argonne National Laboratory in Lemont, Illinois.

Down to the Cellular Level

Argonne is “a multidisciplinary science and engineering research center” that participates in projects spanning physics, engineering, computer science and biology. Many of these projects utilize advanced machinery for highly technical analyses. And in the past few years, Argonne researchers have applied their machinery to paleontology. Carmen Soriano, a resident paleontologist at Argonne, will use a technique called X-ray micro-tomography to examine Sue’s arm, which was removed from her fossil skeleton last week at the Field Museum and temporarily transported to Argonne.

Sue, as seen from her best angle. (Credit: Hannah Gavin) Just like computed tomography (CT) scans at hospitals, this method captures a series of X-ray images and assembles them into a holistic 3-D representation. Importantly, this technique is non-invasive: Just as sections of the brain can be analyzed by CT scan without cutting into a skull, Sue’s priceless arm can be scanned without slicing it to bits. Plus, because the x-rays generated at Argonne are particularly high-energy, the x-ray tomography Soriano will perform is 1 million times more powerful than a normal CT scan. It will generate results so detailed that Soriano can model Sue’s bone stress in cellular detail. She will even visualize how blood vessels would have run through the bone. The data from this experiment will, perhaps, generate some answers to that big question about the purpose of T. rex arms — or, at least, eliminate some theories. Critically, says Simpson, it will allow scientists to answer an even more basic question: Was the arm used for anything at all? If the bone doesn’t show any signs of strain or remodeling, it could be a vestigial limb – an evolutionary leftover with little practical purpose for the large dinosaur. Soon, the results will be in and a portion of the mystery solved. And, along with the scientists at the Field Museum and Argonne, Sue’s arm will be credited with giving T. rex paleontology the push it needs to move from hand-waving theory to data-backed conclusion.