To Hell In A Handbasket

What does the Filet-O-Fish at McDonalds have in common with that imitation crabmeat in California rolls and the uh, 'healthy' ingredient in beer-battered fish-n-chips? 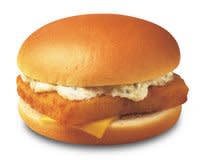 Pollock: poster child of sustainable seafood. Well the pollock fishery is now possibly on the brink of collapse. Managed through the distribution of transferable quotas, fishermen take over one million tons of pollock every year and it seems those critters can't reproduce and recover as fast as they're being harvested. Go figure.

Jennifer's got more detail in her guest post at Grist:

This is why Dr. Jeremy Jackson at the Scripps Institution of Oceanography, says the collapse of pollock would be "the ultimate example of the emperor having no clothes."

Seriously folks, you don't have to be a marine biologist to figure out this level of pressure on a species is probably going to have some serious repercussions.