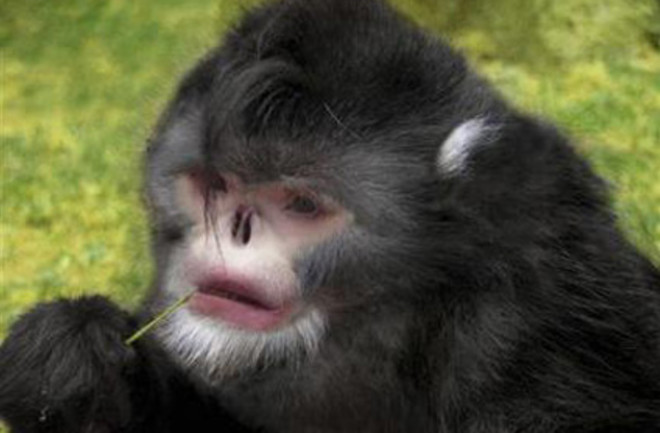 The locals living in a remote Burmese forest gave wildlife biologists very clear instructions on how to find a rare species of monkey: Just go out on a rainy day, and listen for sneezes in the treetops. The snub-nosed monkey has nostrils that point up, they said, and it sneezes when rainwater drips into its nose. Even with these amazingly great directions, the biologists failed to photograph a live specimen of the Burmese snub-nosed monkey--the image at right is a digital reconstruction of what the monkey probably looks like. Still, their examination of skins and skulls in the villagers' possession provided enough evidence to declare that the monkey was a new species that had never before been described in the scientific literature. BBC reports:

Although new to science, interviews with local people in the area revealed that they knew the Burmese species as mey nwoah, "monkey with an upturned face."

The monkey lives in Myanmar's northeastern state of Kachin, and is separated from the habitat of other snub-nosed monkey species by the Mekong and Salween rivers. In the researchers' write-up

in the American Journal of Primatology, they describe a monkey with a white beard and white ear tufts, prominent lips, and a long tail. The researchers also estimate the new monkey's population at between 260 and 330 individuals, which classifies it as critically endangered. The monkey is threatened by hunting, habitat lost to logging, and disruption due to a Chinese dam project on the Irrawaddy River. Happily, the conservation group Fauna & Flora International

, which was involved in the research, has taken an interest in the monkey. The BBC reports

Discoblog: How to Win Friends and Influence Monkeys