Titanoceratops: The Big Dino Who May Be a Triceratops Ancestor

—it's a fittingly majestic name for a monster dinosaur. That's the moniker paleontologist Nicholas Longrich has bestowed on his new find, and he claims his 74-million-year-old discovery is the common ancestor of the famous Triceratops and its cousin in the triceratopsin family, the Torosaurus. 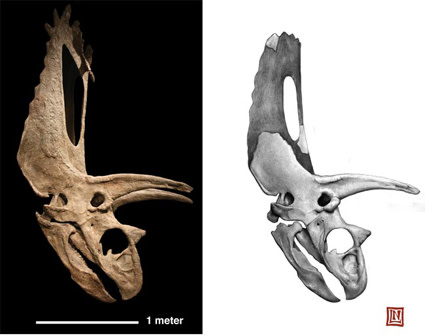 The species weighed in at around 6,800 kilograms [15,000 pounds] and had an enormous 8-foot skull — rivaling Triceratops for size. It is very similar to Triceratops, but with a thinner frill, longer nose and slightly bigger horns. Titanoceratops lived in the American Southwest during the Cretaceous period, about 74 million years ago, and is the earliest known triceratopsin. [Wired]

Actually, Titanoceratops is not a "new" discovery—but the fossil was mistakenly classified for years, Longrich says. The partial skeleton was turned up in 1941 in New Mexico, and left alone until 1995. At that point scientists dug it up and erected the skeleton in the Sam Noble Oklahoma Museum of Natural History

as a dinosaur called Pentaceratops sternbergi (in the right side of the image, the shaded parts represent missing pieces that were filled into to model the skull as Pentaceratops). The Pentaceratops

lived about 73 to 75 million years ago, but it was much smaller overall than a triceratopsin. When Longrich saw this specimen in a book, he thought right away that it couldn't be a Pentaceratops.

"When I looked at the skeleton more closely, I realized it was just too different from the other known Pentaceratops to be a member of the species," Longrich said, adding that the specimen's size indicated it likely weighed about twice as much as an adult Pentaceratops. [LiveScience]

But this question is not settled yet. It is notoriously difficult for paleontologists to agree on the classifications of dinosaurs (especially when they have a scant few fossils to go on), and Triceratops and its family have been the subject of fiery debate recently.

Hopefully, more fossils will emerge to validate this finding. Because now that we have a dinosaur called Titanoceratops, I want to keep it. Longrich's new study

80beats: What Did T. Rex Have for Dinner? New Study Says: Fresh Meat