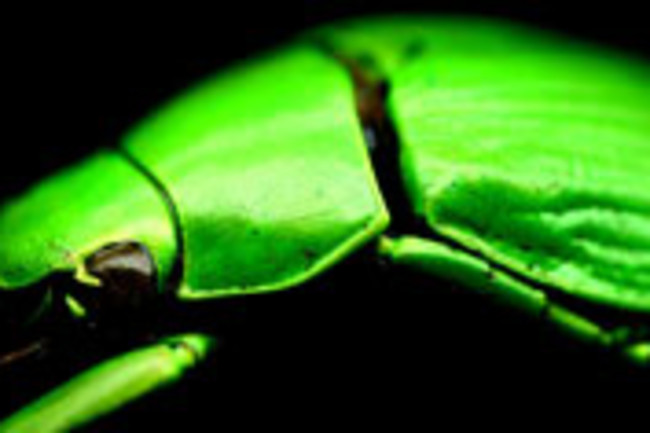 Scientists now know how the iridescent green scarab beetle‘s shell get its iridescent hue: A molecular arrangement that reflects light, with the reflected light’s magnetic field oriented like a corkscrew, according to a study published in Science.

The beetles don’t appear green due to pigments, which give flowers and plants their colors. Instead, they get their hue from structural color, or molecular structures that reflect light in a certain manner–the same way birds and butterflies do. Light hitting the shell is reflected by the microstructures, and these reflections create an electric field that forms a clockwise helix. Humans cannot see this property — known as left-handed circular polarization — but can see a green hue [ScienceNews]; some organisms, however, can actually see circular polarization itself. The molecular structure consists of three shapes: pentagons, hexagons, and seven-sided heptagons.

The scientists studied the pattern on the surface of the beetle’s exoskeleton using specialized microscopy techniques. They saw how the shell of [the beetle] changes colour at different angles, producing the iridescent colours visible to the human eye… Using laser-scanning confocal microscopy for higher magnifications, the group could discern a helical structure. This structure resembled a cholesteric liquid crystal, which circularly polarizes light as a result of defects that twist its ordered layers of molecules with respect to one another [physicsworld]. Cholesteric liquid crystal, which is man-made, is found in gadgets from computer screens to airplane wings, where they indicate structural stress.

Researchers don’t know why the beetle developed its iridescent shell. “Mainly it is supposed to be for mating purposes, [but] the full range of purpose is not yet known…currently there is no evidence that Plusiotis gloriosa can actually distinguish circularly polarized lights of different handedness” [physicsworld], says lead author Mohan Srinivasarao, whose team is now trying to figure out why the insect’s bright hue evolved and how it can be used to develop new types of synthetic materials.