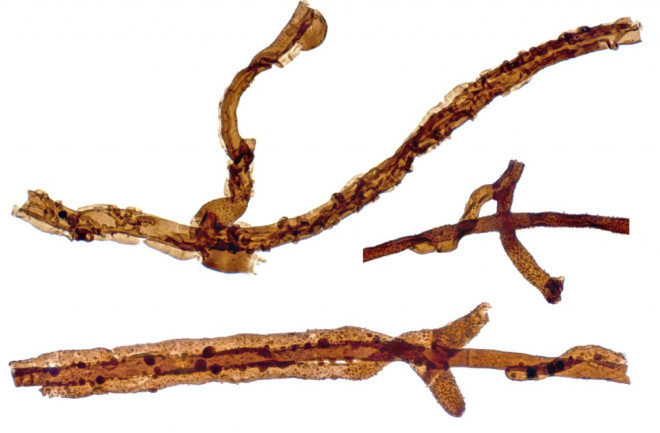 Selection of filaments of Tortotubus from Gotland, Sweden, showing stages in development of filamentous envelope. (Credit: Martin R. Smith) Before primitive ocean-dwellers could crawl out of the primordial sea millions of years ago, there needed to be an ecosystem capable of sustaining them. An ancient, pioneering fungus may have played a key role in transforming Earth's surface into a life-sustaining ecosystem. Dr. Martin Smith, now at Durham University, discovered the 440-million-year-old fossilized remains of a stringy fungus belonging to the genus Tortotubus — similar to mushrooms today. The minuscule fossils are believed to be the oldest-known evidence of a land-dwelling organism. Researchers believe Tortotubus helped terraform the earth by decomposing organic matter and collecting nutrients, paving the way for more complex organisms to establish themselves on land.

Smith identified fossils from samples collected roughly 30 years ago in Sweden and Scotland. The fossils were thought to represent two different species, but Smith examined the fossils using an electron microscope and determined they were identical, and likely represented samples of Tortotubus at different stages of growth. The specimens are tiny, each shorter than the width of a human hair. The fossils were trapped and preserved for millennia in sediment along the banks of an ancient rivers. By dating the rocks the fungi were found in, Smith was able to approximate their age. Smith says that the fossils are mycelium, or the tiny, root-like filaments that the fungus would send out into the soil in search of nutrients. These filaments developed in a manner quite similar to how fungi grow today, sending out branching tendrils that eventually wrap around each other, much like a strand of rope. Smith's findings were published Wednesday in the Botanical Journal of the Linnean Society. While it may be the oldest evidence of life on land, Tortotubus almost definitely wasn't the first, Smith says. That honor likely belongs to species of algae and bacteria that predated the fungus, and provided organic material for the fungus to decompose. Such organisms are almost never found in the fossil record however, as their soft bodies don't fossilize.

A scanning electron micrograph image of the mycelium, which would have been used to transfer nutrients to the fungus. (Credit: Martin R. Smith)

By gaining a foothold on land, Tortotubus helped to pave the way for multicellular life to emerge from the oceans. Earth's landscape 450 million years ago was desolate, not much more than rocks and dust, and inhospitable to life. These early fungi created a layer of nutrient-rich soil by assisting in the decomposition of bacteria and algae that already existed on land. By anchoring themselves to the soil with their mycelium, the fungi also forestalled weathering and stabilized the soil, trapping and concentrating nutrients that allowed life to flourish. Building a supply of soil yielded locations for root-bearing plants to grow, which in turn provided food for larger organisms. Although it may be small, it fills a necessary, if unsavory, role in the cycle of life. We have hardy organisms like Tortotubus to thank for all of Earth's biodiversity.