Tiny fungi replay the fall of the giant beasts 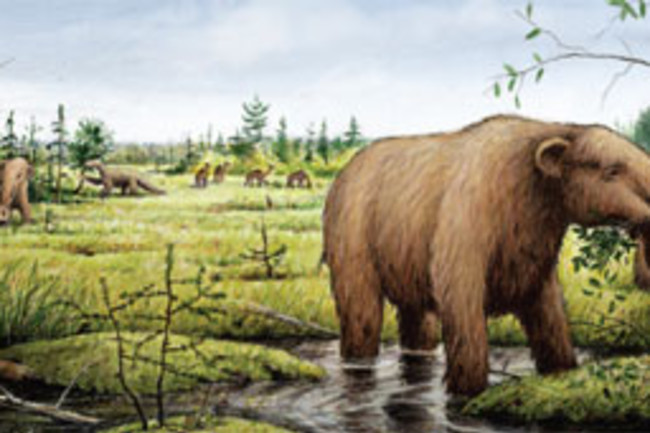 Around 15,000 years ago, North American was home to a wide menagerie of giant mammals - mammoths and mastodons, giant ground sloths, camels, short-faced bears, American lions, dire wolves, and more. But by 10,000 years ago, these "megafauna" had been wiped out. Thirty-four entire genera went extinct, including every species that weighed over a tonne, leaving the bison as the continent's largest animal.

In trying to explain these extinctions, the scientific prosecution has examined suspects including early human hunters, climate change and even a meteor strike. But cracking the case has proved difficult, because most of these events happened at roughly the same time. To sort out this muddled chronology, Jacquelyn Gill has approached the problem from a fresh angle. Her team have tried to understand the final days of these giant beasts by studying a tiny organism, small enough to be dwarfed by their dung - a fungus called Sporormiella.

Sporormiella grows in the droppings of large plant-eating mammals and birds, and it leaves tell-tale spores in its wake. More spores mean more dung, so Sporormiella acts as a rough indicator of the number of herbivores in a given area. The fall of these beasts is reflected in falling numbers of spores.

Gill counted these spores in the sediment of Indiana's Appleman Lake, and compared them to counts of fossilised pollen and charcoal from the same soil. That allowed her to match the numbers of plant-eaters at any given time with the local plant species and the frequency of forest fires.

Using this fungal index, Gill has produced a detailed timeline of the changes in the Pleistocene. Her revised history argues against a role of climate change or alien rocks, but fails to clear early humans of the blame. More importantly, it suggests that many events that happened around the same time, such as an upheaval in the local plant communities and a rise in large infernos, were the result of the beasts' decline, rather than the cause of them. 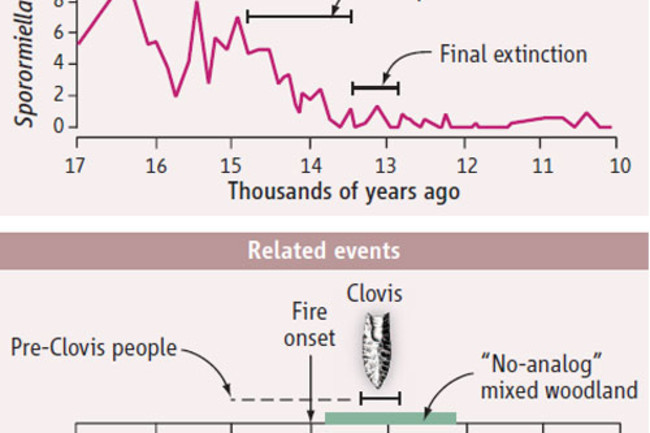 The spores revealed that the fall of the megafauna began in earnest around 14,800 years ago. By the 13,700 year mark, their numbers had fallen to less than 2% of their former glory. They never recovered, but it clearly took a few more millennia for the stragglers to succumb - the last bones of the great beasts date to around 11,500 years ago.

Changes in the local vegetation happened after the beasts started disappearing, around 13,700 years ago. Before this point, the environment was open grassland with the odd tree. Fires were a rarity. But without the suppressive mouths of the big plant-eaters, trees grew unchecked, producing a combo of vegetation you just don't see today. Large numbers of temperate deciduous trees like elm and ash happily coexisted with cold-loving conifers like larch and spruce.

And with them came fires, large infernos that broke out around 14,000 years ago and returned every century or so for the next few millennia. The pollen and charcoal of Appleman Lake tell the story of these changes, and also show that they came after the beasts' disappearance.

Right away, this timeline rules out the possibility that a collision with a large space object killed the megafauna. The proponents of that theory place the collision at around 13,000 years ago, after the giants had started to decline. And it's clear that extinctions were long, drawn-out affairs, rather than the relatively rapid annihilations you'd expect from an extraterrestrial impact.

Likewise, changing climate becomes an unlikelier suspect. The megafaunal extinction predated a rapid, millennium-long chill called the Younger Dryas that took place around 11,500 and 12,800 years ago. When the megafauna started dying, the Earth was going through a warming phase. That might well have affected them, but it didn't do so through the most obvious method - changing the plants they ate. After all, Gill's work tells us that the beasts' disappearance changed the plants, not the other way round.

What about humans, those pesky slayers of animals? Some scientists believed that North America's Clovis people specialised in hunting big mammals, causing a "blitzkrieg" of spear-throwing that drove many species to extinction. But these hunters only arrive in North America between 13,300 and 12,900 years ago, around a thousand years after the population crashes had begun.

If people were responsible, they must have been pre-Clovis settlers. There's growing evidence that such humans were around, but they weren't common or specialised. They may have contributed to the beasts' downfall, while Clovis hunting technology delivered a coup de grace to already faltering populati0ons.

By analysing the sediment at Appleman lake - spores, pollen, charcoal and all - Gill has replayed the history of the site, spanning the last 17,000 years. Her data rule out a few theories, but as she says, they "[do] not conclusively resolve the debate" about climate causes versus human ones. It's possible that similar studies at different sites and other continents will help to provide more clues.

Meanwhile, her study certainly tells us more about what happened in Earth's recent history, when a large swathe of hefty plant-eaters died off - a change from savannah to woodland, and more fires. This isn't just a matter of historical interest. The same events might be playing out today, as the largest modern land mammals suppress fires by eating flammable plants, and are facing a very real threat of extinction. History could well repeat itself.