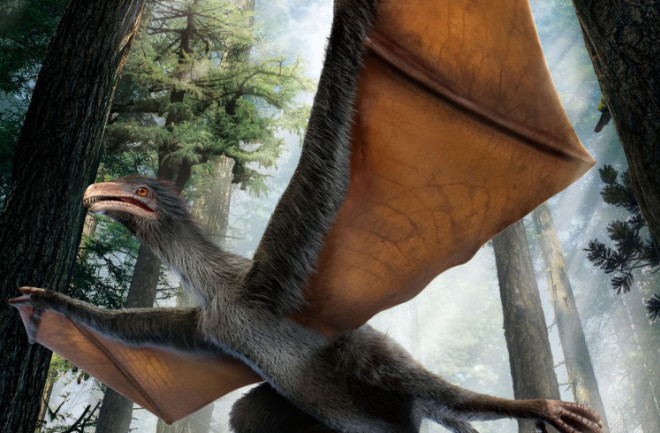 Artist’s impression of the new dinosaur Yi qi. Credit: Dinostar Co. Ltd Scientists have long known that modern birds are the descendants of dinosaurs. Many small dinosaurs in the late Jurassic period even had feathers. Now, paleontologists in China say that they’ve identified the fossils of one of the earliest flying dinosaurs, but its wings are nothing like those of modern birds. They’re so different, in fact, that paleontologists Xu Xing and Zheng Xiaoting named the little dinosaur Yi qi (pronounced “ee chee”), which means “strange wing” in Mandarin. Despite being a close relative of feathered birds, Yi qi had wings that looked more like those of modern bats or flying squirrels. The discovery raises more questions about the origins of flight.

Bird wings are muscular, supported by the bones of the forelimb, and most of their aerodynamic shape comes from long feathers. Yi qi’s wings were membranes of skin, supported by a curved, rod-like bone extending outward from each wrist. “We believe that Yi qi is probably not a great flyer,” Xing said. “I guess it might move in the air by a combination of flapping flight and gliding flight, but rely more on the latter.” Xing and his colleagues aren’t sure exactly how the rod-like bone, which they call a “styliform element” would have connected to the wrist, but they think it would probably have gotten in the way of much flapping. Yi qi’s skeleton also showed no signs of the kinds of muscle attachments points that scientists expect to see in animals that flap their wings to fly. It probably glided short distances, perhaps between trees or from high perches down to the ground, but it would probably have had to climb, rather than fly, up again.

Paleontologists have reconstructed Yi qi based on a partial skeleton found in a rock slab in Hebei Province, China, which dated to the mid- to late Jurassic Period, from 175 million years ago to 145 million years ago. Flight is the only plausible explanation for the rod-like bone attached to the dinosaur’s wrists, said Xing and his colleagues in a study published in today’s issue of Nature. The surrounding rock even preserved some patches of Yi qi’s wing membranes between the styliform element and its fingers, though not enough for paleontologists to be completely sure of the wings’ size and shape. Xing said that researchers believe Yi qi had a wingspan of about two feet. That’s an impressive spread for an animal that weighed about as much as an average pigeon. Many feathers also survived in the rock, and it appears that Yi qi had short feathers covering most of its body. By examining preserved melanosomes, the pigment-making structures within cells, scientists determined that Yi qi was either black or grey, with reddish-brown wings, and it boasted a black or reddish-brown crest atop its skull, according to Xing.

Yi qi belonged to a family of small, feathered dinosaurs called scansoriopterygids, which were very closely related to early birds like the well-known Archaeopteryx. But instead of feathery wings like its close relatives, Yi qi flew on bat-like membranous wings. “This is the most unexpected discovery I have ever made, even though I have found a few really bizarre dinosaurs in my career,” Xing told Discover. Yi qi wasn’t the only glider in its time. Pterosaurs, which soared on leathery, featherless wings, had diverged from dinosaurs during the middle Triassic period. The pterosaurs’ branch of the family tree produced no modern ancestors, but the dinosaurs’ branch eventually led to modern birds. Yi qi seems to have also been an evolutionary dead-end in the long run. “What we know is it is a failed experiment in flight along the line to birds, but we don't know why,” said Xing. He added, “One reason might be that feathery wings in other bird-like dinosaurs and birds are more efficient and more competitive.”