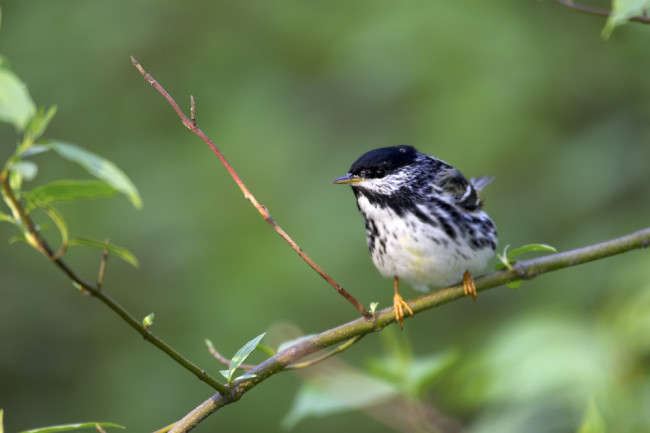 A tiny songbird that summers in New England can pull off something even the biggest airline companies can’t: A nonstop flight from Vermont to Puerto Rico. Every fall the blackpoll warbler embarks on an incredibly dangerous, nonstop flight from New England and eastern Canada to warmer temperatures in the Caribbean. Not only is the flight nonstop, the tiny birds’ course runs entirely over the turbulent waters of the Atlantic Ocean. For more than five decades, scientists believed this epic journey was taking place, and now an international team of biologists has confirmed it's true.

Technology was one of the main reasons scientists had scant evidence regarding the blackpoll warbler’s migration route. Most tracking devices, called geolocators, were far too heavy for warblers, which grow to weigh only 12 grams, or as much as a ballpoint pen. But recent advances in the technology allowed researchers to fit dime-sized locating devices onto the backs of 19 blackpolls from Vermont and 18 from Nova Scotia. Since the sun is out longer as you travel further south, the trackers pinpoint the birds’ location by simply recording the date and the length of daylight. Of the 37 birds fitted with the locating devices in summer of 2013, a total of five were successfully recaptured — it’s a brutal round-trip that only half complete. From the data, scientists learned blackpolls make a nonstop 1,400- to 1,700-mile trip over open water to Puerto Rico or Cuba in two or three days. After stopping on a Caribbean island, blackpolls finish the final leg of their journey to the northern countries of South America. The results were published this week in the journal Biology Letters.

Why the Long Trip

To prepare for the migration blackpolls gorge themselves on insects and can double their body mass pre-trip. The added bulk gives them the energy to fly over open water without stopping, because coming to rest in the Atlantic Ocean would be certain death for a blackpoll. Blackpolls aren’t the only birds with an epic migration route. Albatrosses, sandpipers and gulls all travel long distances to southern wintering grounds, but these birds take a longer route that takes them over land. So why do blackpolls take such a risky route? Scientists aren’t quite sure. Perhaps, the authors say, blackpolls just want to get the migration over as soon as possible, since it is the most dangerous activity they partake in. So next time you’re on a long-haul flight, just think of the tiny, unstoppable blackpoll making it there on just a few grubs in its tummy.